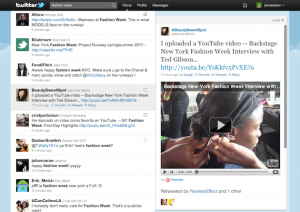 Last night the web (or at least the part that looks at the web through Twitter) was a buzz with news of Twitter’s new redesign. The one thing I can say for certain is that the redesign of the Twitter iPad App that features panes of information now makes some sense. Beyond that it is tough to comment as the roll out of the new redesign will be a slow one across the Twitterverse, most likely to keep Twitter from crashing the way it usually does when it does something new.

Most of the comments from the Twitterati is favorable about the new design, the essence of which now features two panes across a web page: one displaying the familiar twitter stream, the other opening up a window for media (pictures, video, etc…). The other part of the commentary is that since this all happens in the browser, Twitter’s new redesign will cause trouble for all those third party apps out there like Tweetdeck. The suffix -killer has been used a lot in the commentary. Most of those apps added functionality to Twitter’s simple stream of tweets, but it looks like the folks behind Twitter want some of that action for themselves. Of course when you look at the pictures of the new web UI, you can just see a canvas that is ready and waiting to display advertising.

And while it is premature to lay out any real thinking on this, my early reaction to what I’m reading is telling me that this might play against one of the best features of Twitter in the first place, and that’s simplicity. We’ll have to wait and see how that works after the roll out and the inevitable period of time that it drags Twitter to a halt.