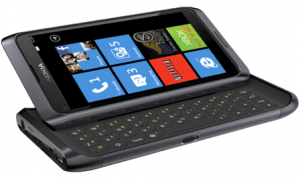 Nokia is gearing up to launch its first portfolio of smartphones running Microsoft’s revamped Windows Phone 7 operating system pre-loaded with the Mango software update. The latest leak reveals that Nokia will be launching at least two phones, one with a touchscreen-only form factor, and another with a keyboard. News of this latest rumor comes by way of Reuters, which is reporting on an article published in China’s Commercial Times, which has a mixed track record for leaks.

Initial reports suggest that in order to get its first batch of Windows Phone 7 devices in time for an end-of-year launch, Nokia may resort to recycling some hardware designs from its current batch of Symbian^3 devices. For example, the flagship Nokia N8 may get rebadged to a Nokia W8 phone, along with the necessary hardware changes such as the swap to a Qualcomm Snapdragon processor.

The Commercial Times report says that the keyboarded version is to come with a ‘keypad.’ Whether that means a full QWERTY keyboard or a number pad for dialing is unclear.

Nokia in the past has been known for its Communicator series, which offers a comfortable QWERTY keyboard arrangement. Its latest evolution of that series is the Nokia E7, described as a business-class Symbian^3 smartphone with an elegant aluminum and glass construction that’s solid, sturdy, and well-built with an 8-megapixel camera. If earlier reports are correct in assuming that Nokia would be recycling old Symbian designs into Windows Phone 7 initial roll-outs, Nokia could potentially re-badge the Nokia E7 as the W7.

Still, yet, Windows Phone 7 devices with QWERTY keyboards are the rarity and not the norm for the platform. In the initial roll-out of Windows Phone 7 late last year, the majority of devices bear the touchscreen-only slate form factor. Only one device–the HTC 7 Pro, which was re-badged as the HTC Arrive and comes with a CDMA radio for Sprint–was released with a landscape-oriented QWERTY keyboard. Another rare form factor is the portrait-oriented slider, which is found on the sole Dell Venue Pro.

I’ve played around with the Sprint version of that handset, known as the HTC Arrive in the U.S. Though it offers an excellent user experience–snappy transitions, animated graphics, and a fast web browsing due to an optimized version of Internet Explorer and with Sprint’s 3G CDMA EV-DO Now Network–the device has limited support in landscape orientation, which is how one would use the phone with the keyboard slid open. Most apps are able to rotate to landscape, but some, like the app menu–similar to the Programs Menu for Windows Mobile veterans–and the homescreen with the Live Tiles failed to switch to the landscape orientation.

Since Nokia has access to Windows Phone 7 code, and it is the only manufacturer privy to this, hopefully the hardware-maker can make some changes to accommodate full landscape support throughout the OS.