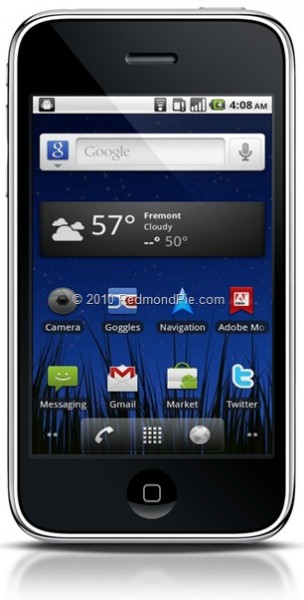 While we had reported that Skyfire had legitimately made it to Apple’s iPhone App Store to bring a little taste of Adobe Flash for iOS users, there may be another illegitimate, unofficial way to do get Flash on your phone. My friend David Gasior had sent me a link that Google Android 2.2.1 has officially been ported for the iPhone 3G and the original iPhone. This hack, via the unholy matrimony of Apple’s iOS on an iDevice and Google’s Android Froyo OS, will allow users to run Flash on their iPhones.

The process–we’re not sure how legal it is to use a version of Android with Android Market and Google services built-in and we’re guessing the hackers and modders didn’t get an official license and sanction from Google for the port of Android 2.2.1 for Apple’s devices–requires a jailbroken iPhone. After the iPhone is jailbroken and Cydia, the “unofficial” app store for all things not approved for the official Apple App Store, is installed, users can add a repository to Cydia and download the iDroid package on their iPhone 3G or original iPhone.

Redmond Pie has the full guide on what you’ll need to do if this is something that you wish to tinker with, but again, you should check with the laws of your jurisdiction before doing so. While the U.S. government has re-written the Digital Millennium Copyright Act (DCMA) to legitimize rooting and jailbreaking, there may be other intellectual property that you’re infringing on. We’re simply reporting that the process is out there and to highlight some of the development outside the official App Store. I personally have not tried the process and do not know how well the dual-boot solution is or how stable the process is.

The neat thing about this is that it is a dual-boot solution, meaning that you can either boot into your traditional iOS environment or you can go to Android via Froyo. With Froyo, you’re said to be able to get OTA updates as well as being able to run Adobe Flash 10.1.

While Apple has traditionally touted its dual-boot solution for PCs and notebooks via its BootCamp interface to allow Mac OS X users to boot between running a Windows PC environment or OS X on their Mac hardware, I don’t think our friends in Cupertino, California will be too thrilled to know that the little green robot has invaded their clean, minimalist design.