Use Your Mouse Across Multiple Computers with Mouse Without Borders 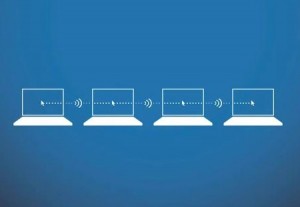 In an age where Touch is King in User Experience there are still quite a few folks out there who use keyboards and a mouse. And there are folks who use multiple computers with those peripherals hanging off of them. We’ve seen quite a few software solutions that allow users to use the same keyboard and mouse on multiple screens and we’ve seen a few that allow users to point and drag items across multiple computers. Synergy comes to mind as one example.

TechNet is highlighting a new little app called Mouse Without Borders that allows you to use these peripherals with up to four different computers. It was developed in Microsoft’s Garage by Troung Do. The Garage is apparently both a physical location at Microsoft and a company-wide initiative to encourage grass roots innovation and some tinkering and hacking among Microsoft employees. Some of the stuff they come up with ends up being rolled into Microsoft products, some doesn’t. And some, like Mouse Without Borders, gets released as standalone download.

You can check it out in the video and it is available for download here.