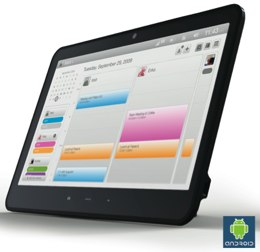 You know it seems like Tablets are always just over the horizon. Every announcement (or rumor) keeps pointing towards 2010 and here’s hoping that at least some ofÂ  those pointers prove out, unlike some others (can you say Crunchpad?)

Anyway, Innovative Converged Devices is looking to roll out an Android Tablet in 2010 according to VentureBeat. Actually several Tablets as they are planning 7, 11, and 15Â  inch devices. And as I said it will be running Android, and the report says the Eclair flavor (that’s 2.0 for those not up on the pastry naming conventions.) VentureBeat also says that we’ll see these roll out with WiFi and 3G and most likely subsidized by carriers. The horsepower will come from NVidia’s Tegra platform, it will include a resistive touch screen, and it looks like it is being aimed for media consumption in the home.

We’ll have to keep and eye out for this at CES.

More pictures of this at Mashable.