Many news sites and blogs are hailing the Motorola Droid’s marketing campaign as a substantial success.  It has been estimated that over 250,000 Droid’s were sold in the first week of its launch in early November.  NFL games and family sitcoms have been interrupted by commercials showing stealth bombers launching Droids, the Droid’s grit and determination has been seen in the boxing ring, and we’ve all learned what Droid does.  Despite the perceived success, it now appears that Verizon is letting up on the Droid attack.

Let’s face it, AT&T is known for the iPhone; it is their flagship device.  If Verizon expects the Droid to be on the same playing field as the iPhone, it cannot give up the push.  Verizon must stand behind the Droid as its premier device if they expect long-term consumer adoption to continue.  Let’s examine a few good and bad points of Verizon’s marketing strategy. 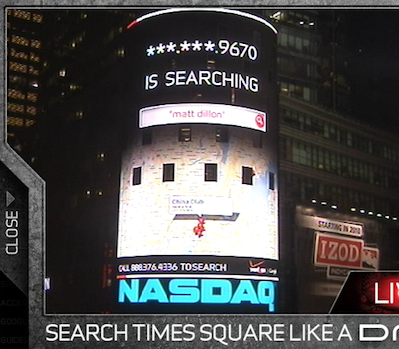 I kept reading about how the Droid allowed users to call an 888 number and use their voice to search Times Square.  Seemed cool, but it took time and energy on my part to participate.  Not cool enough.  After being blitzed over and over, I finally decided it would be worth a try.  I called up the 1-888 number and was surprised by how easy it was to get my very own name in the marquee lights of Times Square.  I’ve since been showing this picture to lots of folks and bragging about how my name has been featured in the big city’s lights.  It took me a while to participate, but this was a very creative and fresh marketing idea.  Once folks started having the same experience I did, it seemed to take off even more.

Focusing on all things manly
The Droid has been heavily marketed towards anyone that identifies themselves as a man.  While I agree that this could also fall into the bad category (women make and spend lots of money too), it has worked for Verizon.  Everything from the Droid’s look to the commercials that have been playing on the air tell us that this thing is studly.  It’s solid, rough around the edges, and reminiscent of something the Marlboro Man would carry in his saddle bags.  The numbers reveal that the “man-paign” has worked.

Loose Association with Star Wars
Look closely at the fine print on DroidDoes.com and you’ll see a disclaimer about the licensing of the term Droid.  The term Droid was licensed from the one and only Lucas Films LTD.  That’s right, Verizon has licensed the term from company which brought us the Star Wars franchise.  Oddly, I have yet to see any close association with the Star Wars empire.

From the DroidDoes.com web site:

It is no surprise that the Droid has been marketed towards the macho, the manly, the poweruser, and the ubergeek.  The iPhone on the other hand is marketed towards the trendy and popular.  What better way to connect your product to the ubergeek, manly crowd than by showing a commercial with a bunch of storm troopers communicating via Droids?  This seems to be a big missed opportunity for Verizon in their Droid campaign.  There is a huge potential for another cell company to pick up a similarly featured smartphone and pursue the realm of Star Trek.  Call it a Tricorder, model it after what was used in the movies, and you’ll have an instant success.  Verizon has missed the boat by not fully capitalizing on the Star Wars universe.

Is Verizon Giving Up?

The Droid attack cannot weaken if Verizon expects consumer adoption to continue.  They need to stand behind this device as their exclusive, powerful, and capable smartphone offering.  This is one situation where diversity may not be a good thing.  As we’ve been reading of splintering within in the Android sector, Verizon must take ownership of this device and truly make it their own.  I was disheartened when I read via the @DroidDoes Twitter feed that they would be closing up shop.  No more handy tips, no more sharing of what other Droid users are doing, no more

links to handy apps.  Explain to me, Verizon, how abandoning a popular feed with over 7,000 followers makes sense?  Now we’re supposed to follow the corporate boring VZWOffers to stay up to date.  No thanks, I’ll find an alternative source to follow.

What is up with Motorola releasing the Droid overseas, the same device as our beloved Verizon Droid, and giving it a different name and marketing strategy?  That is a recipe for stupid.  You don’t see Apple marketing the iPhone as the aPhone or Newton’s Caller.  Again, if Verizon expects this phone to have an identity, it cannot allow other carriers, Motorola, or whomever is involved to defeat the marketing blitz that has been happening in the United States.  It’s like buying a Mazda when everyone really knows it’s really a Ford.

I was a tad refreshed to see others felt as I do about the weakening Droid campaign.  At last, I felt that Verizon had delivered a smartphone that is fast, feature-packed, and competitive.  And now you want to abandon ship?  Verizon is at a pivotal point in their marketing with the Droid.  Those who were going to buy it regardless of commercials have done so, and now they must appeal to everyone else.

How do you feel about Verizon’s Droid campaign?  Have you been bombarded by what Droid thinks it can do?  Hit up the comments and share your ideas.