This morning Verizon quietly put up a teaser website for the upcoming HTC Droid Incredible 4G LTE, only to pull it a few minutes later.

The Verge spotted the website, and managed to take a few screenshots before Verizon took the teaser down. The teaser showed a smartphone that looks like the leak we saw earlier, which is to say it looks like the original Droid Incredible with a few changes.

The teaser page listed specs for the new phone that seem very similar to the HTC One S. The HTC Droid Incredible 4G LTE has a 4-inch qHD LCD display, 1.2GHz dual-core CPU, 1GB of RAM, 8GB of internal storage, and a microSD card slot. The phone also has a front-facing VGA camera, and an 8MP rear-facing camera that can shoot 1080p video. 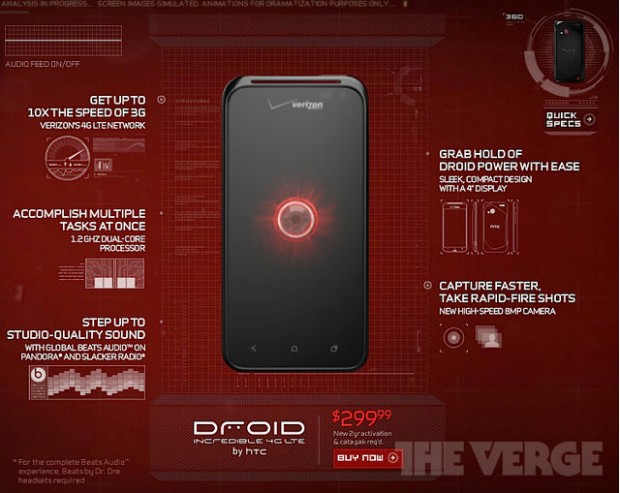 On the software side, the HTC Droid Incredible 4G LTE runs Android 4.0 Ice Cream Sandwich with HTC’s Sense 4 skin. It also has built-in Beats support to “enhance” sound from any music app on the phone, though it’s completely optional.

Verizon listed the phone for $299.99 which is fairly steep, especially considering the HTC One X is coming to AT&T for $199.99. If the price stays the same, it will cost the as much as the Motorola Droid RAZR MAXX and the Samsung Galaxy Nexus.

The website didn’t have a release date for the phone, and the “Buy Now” button linked to the Droid RAZR MAXX, but it will hopefully come to market soon. Verizon obviously has at least some of the marketing material ready for the HTC Droid Incredible 4G LTE, the carrier just needs to tell us when we can buy it.