In some fantastic news for HTC ThunderBolt owners, Verizon has approved the HTC ThunderBolt Ice Cream Sandwich update which means that a roll out should be taking place in the near future, a roll out that will be coming just about five months later.

Just a day after we told you that the HTC ThunderBolt update was still in the works comes Verizon’s approval of the ThunderBolt’s Android 4.0 update that has long been delayed. The update was originally supposed to have rolled out in August though HTC delayed the update indefinitely. Since then, while HTC has said that it was in the works, it remained mum on a release date. 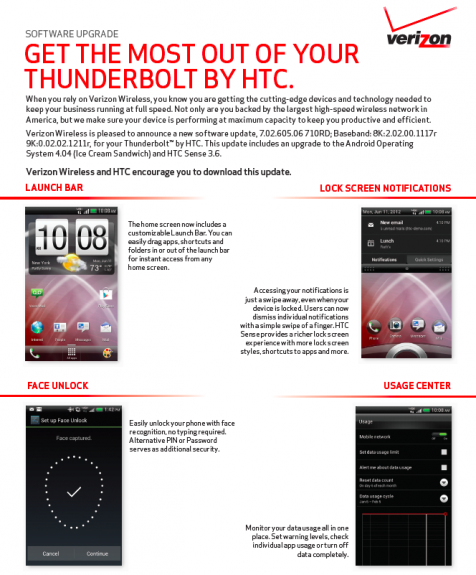 The HTC ThunderBolt Ice Cream Sandwich update has been approved.

Unfortunately, today’s approval does not bring a release date to the table, but it does mean that a roll out is extremely close. Potentially within a few hours or even a few days.

The official build will be 7.02.605.06 which will bring the HTC ThunderBolt up from Android 2.3 Gingerbread and bring it to Android 4.0 Ice Cream Sandwich while tacking on HTC Sense 3.6. Needless to say, the differences between the two are massive and this will be a welcomed upgrade for HTC ThunderBolt owners who have been waiting for months on end.

The update is 395MB in size which means that those who do choose to install it will want to set aside a bit of time in order to install the software. Typically these updates can take 30 minutes and because the HTC ThunderBolt is so old, it very well could take that long. 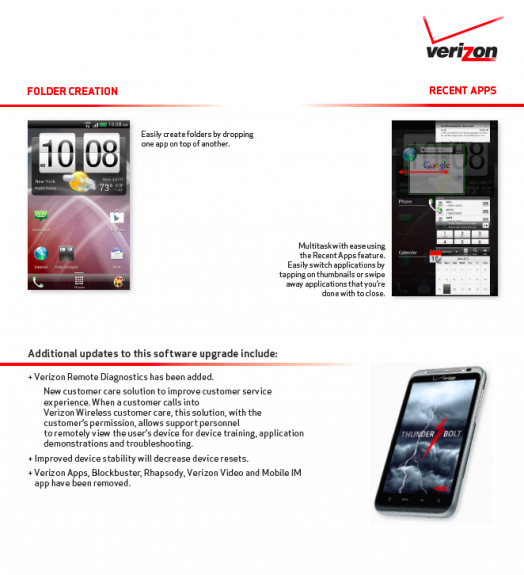 Droid Incredible 2 owners must wait for their ICS update.

Not that that matters to owners of the aging smartphone. What really matters is that the update is here and that it will be bringing all of the ICS goodies to the table including a new user interface, Face Unlock, new Folders, Multitasking functionality, and more.

HTC ThunderBolt owners should be on the look out for the update soon, though, we caution against mashing the check for update button.