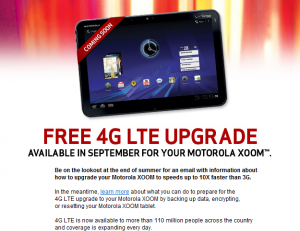 It was reported earlier that the Motorola Xoom’s 4G LTE software and hardware upgrade will be coming–free to current Xoom 3G owners–in September, the carrier is now beginning to email customers about the upgrde. Other than confirming that the 4G LTE upgrade will be coming in September, the email was vague in details. It did, however, advised customers to be on the lookout for a second email this summer with additional information and instructions on preparing the Xoom for the 4G upgrade.

Unlike traditional software update, this will also require a hardware upgrade. The Xoom will need to be shipped out to Motorola where a hardware radio swap would be made to give the tablet access to Verizon’s LTE network. With 4G LTE, the Xoom can surf the Internet with speeds up to 10 times faster than the carrier’s 3G network.

Ahead of the radio upgrade and the launch of the slimmer Galaxy Tab 10.1 from Samsung with built-in 4G LTE, Verizon Wireless had recently begun to discount the pricing of the Motorola Xoom 3G. Now, priced at $600, the 3G/4G-enabled Xoom’s pricing matches that of the WiFi-only model.