It’s that time of year again, when everyone can find a deal or two worth jumping on. This year the Verizon Black Friday deals look to be some of the best. At least for shoppers who want a new smartphone. Here’s what buyers can expect from Verizon’s Black Friday sale.

A leaked Verizon Black Friday ad spilled the beans early. but now the carrier has confirmed everything themselves. Those looking to get the latest smartphone, iPad, iPhone and accessories will want to head to Verizon.

Every year around Thanksgiving we see huge savings across a wide array of products. Tech gifts are always one of the biggest items and Verizon wants to cash in on the craze. So, savings like $400 off the Google Pixel and Galaxy S7 are coming. Interested yet?

While big retailers like Walmart, Best Buy and Target are usually important stops, many forget about carriers. They want business just as much as everyone else. That’s where the Verizon Black Friday deals come in. Everything from giving buyers huge savings, to pairing up with Apple for even better deals. 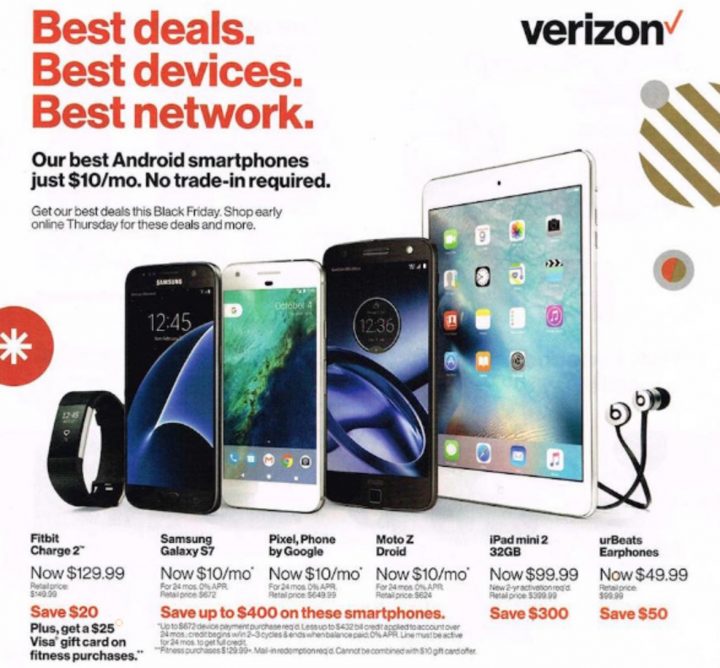 Verizon will have impressive deals on multiple different devices and accessories. Obviously a smartphone for $10 a month is a big deal, and that’s one of the headline offers this year. The other being almost any flagship smartphone is free, with an eligible trade-in and signing on for a payment plan. However, the eligible trade-ins are high end devices anyways. So it’s more of a side-trade. To sweeten the deal Verizon will give those who switch a $200 visa gift card.

The biggest standout is the $400 off popular smartphones like the Google Pixel or Galaxy S7, but that isn’t the only thing you should be aware of. Below is a breakdown of many of the savings you’ll get from Verizon on Black Friday 2016.

Verizon finally announced the entire list of deals, which can be found below.

Furthermore, the LG V20 or Galaxy S7 Edge will be $200 off with lower monthly payments. Then there are deals like buy two cases or accessories and get one free, and a deal from Apple. It’s worth nothing the $10 a month smartphones aren’t outright savings. Instead after 2-3 billing months Verizon will “credit” your account the difference. The device will need to be used for the full 24 months. It’s like a 2-year contract, in a sense, just at a big discount on monthly payments.

Along with some great Apple deals, the company will team up with Verizon and offer anyone who buys an iPhone on BF $250 off an iPad. Essentially bringing the popular iPad Pro 9.7-inch down to $479. The Verizon Ellipsis 10-inch tablet is just $49 with a new 2-year agreement as well.

Again, buyers can look forward to early Verizon Black Friday deals online at Verizon.com/blackfridaydeals on Thursday the 23rd, and even more savings on the big day. We could see a few more discounts surface come Friday, so stay tuned for more details.