After Deutsche Telekom-owned T-Mobile‘s lead in abandoning two-year contracts and the promise of cheaper service plans as a result of not having to subsidize devices, Verizon Wireless customers are asking their carriers to do the same and adopt T-Mobile’s UNcarrier movement. Customers now have turned to Change.org‘s petition to ask Verizon to ditch contracts and provide a more affordable means for customers to buy and purchase new devices. 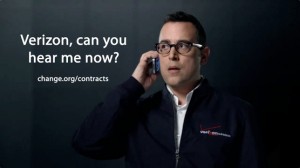 “So here’s your chance: sign this petition to tell Verizon to end carrier contracts and create an affordable way for consumers to purchase their devices,” the petition reads. “If you’re a current customer, you don’t have to switch carriers or have plans to switch carriers. I’ve been a long-time Verizon customer and I don’t see myself ever leaving; but I want that choice myself; I don’t want them making it for me and imposing stiff penalties if I do decide to leave.”

And the move is definitely something Verizon Wireless may be interested in doing. The company’s CEO has repeatedly stated on the record that the carrier is open to following T-Mobile’s lead in abandoning subsidies and contracts if T-Mobile is successful with its new endeavors.

In addition to Verizon Wireless, AT&T Mobility and Sprint Nextel also have expressed a willingness to adopt T-Mobile’s UNcarrier way of thinking as well.

And Verizon Wireless have already begun to implement small steps to become an UNcarrier wireless carrier. Like T-Mobile, Verizon has confirmed that it would be launching a new plan that would allow customers to finance the retail costs of devices–tablets and smartphones–priced over $350. The financing would be spread out over a period of 12 months with a $2 financing charge added each month. T-Mobile on the other hand offers zero-interest financing.

Additionally, unlike on T-Mobile where customers would see a reduced rate, or more value, in terms of their monthly service plans compared to the old business model in the wireless business, Verizon customers who choose to buy their devices outright currently under the financing plan would experience no such reduction in their wireless rate plans.