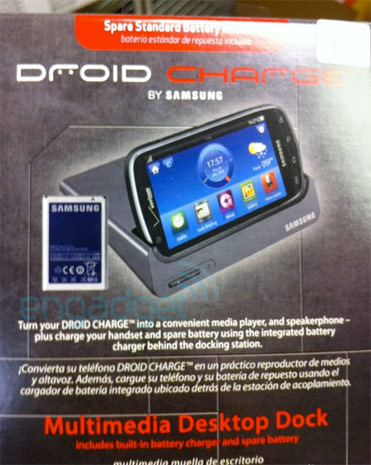 With the anticipated launch of the Samsung-branded Droid Charge soon, a device that was merely known as the Samsung 4G LTE Android smartphone at the CES unveiling of Verizon’s 4G consumer device lineup, a new accessory was leaked out. A tipster had sent Engadget a photo of a box for a multimedia dock for the un-released smartphone that does multiple jobs–providing an output for connecting to an HDTV, charging a spare battery, charging the smartphone, and putting the Droid Charge into speakerphone mode automatically when a call comes in.

The interesting thing about the Droid Charge is that Verizon is opening up its high-end Droid branding to devices with extensive UI customizations. When the Droid line debuted, Motorola’s customization was mainly through widgets except for the lower portion with shortcuts to the app drawer, contacts, and phone. Other than that, if a user decided to remove the widgets, the device wouldn’t feel too much different from a stock Android device. HTC had also provided a mid-range device with HTC Sense, which provides for more extensive customizations at the time. However, since the original Motorola Droid 1 and HTC Droid Eris, Motorola had taken over the Droid lineup with the Droid X1, the Motorola Droid 2, the Droid 2 Global, Droid 2 R2D2 Edition, and the Motorola Droid Pro. Now, with Samsung joining the lineup with the company’s TouchWiz UI, Android’s UI has been over-powered with Samsung’s customizations more so than any carrier before Samsung in the Droid lineup.

TouchWiz, unlike Motorola’s widgets customizations, serves to take over Android rather than augment it. Additionally, unlike HTC Sense where once the widgets and shortcuts that the manufacturer had created are removed, Samsung’s devices would still show traces of the Samsung-made UI. In the case of TouchWiz, if you’ve ever played with a Samsung Fascinate or any other Galaxy S variant, you’ll know that Samsung repackages the app icon shortcuts and the customizations run deeper to the app menu as well. Once the app drawer is opened, rather than the traditional vertical scrolling, you’ll find that Samsung had implemented pages, similar to on iOS, where users would swipe horizontally to move between pages of apps. With the Droid Charge now, Verizon is opening up the Droid branding to devices that bring newer and more extensive UI customizations to the Droid brand.

Prior to the Samsung Droid Charge, one of the speculated reasons why Verizon didn’t put the Samsung Fascinate–a Galaxy S variant–into the Droid brand was because of the Bing integration where Samsung partnered with Microsoft for search, rather than go with Google for the default search options. However, I postulate that the main reason is that the Fascinate is also available–as variants–on different carriers, making it less of a ‘Verizon exclusive’ device.

Additionally, Verizon also carries other Android smartphones sans Droid branding, like the LG Ally. Samsung’s tablet customizations on Android via the new Galaxy Tab 8.9- and 10.1-inch devices are more subtle. Instead of calling them TouchWiz, Samsung’s calling its tablet enhancements the Samsung UX.