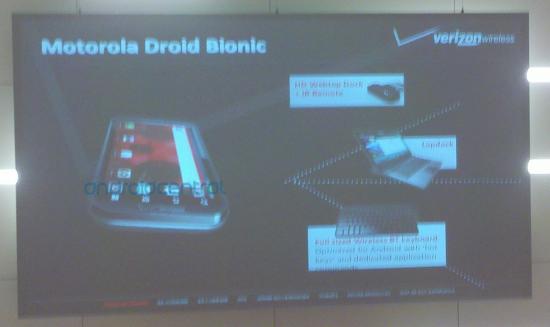 In addition to the full HD desktop dock that was leaked by Amazon recently, Verizon Wireless leaked two additional accessories for the forthcoming Motorola Droid Bionic 4G LTE Android smartphone in its earnings report. A slide for the smartphone reveals that the device will also get a Bluetooth keyboard from Motorola along with a laptop docking solution, similar to the Motorola Atrix 4G for AT&T, which will essentially convert the smartphone into a laptop.

The laptop dock revealing suggests that the Droid Bionic will either launch with, or be software updated to include, Motorola’s custom Webtop OS, which itself is based on Linux. The Webtop OS is in addition to the Android operating system and will be used in both the HD desktop dock as well as the laptop dock, and allows for a full Mozilla Firefox browser implementation. The Webtop OS will also mirror the Android OS on the phone and will allow users to scale out their Android applications to run full screen on the laptop dock’s display as well.