Next time somebody walks into a Verizon store and asks for a new smartphone, they will likely be guided to a 4G LTE Android device over the iPhone.

According to CNNMoney, Verizon representatives are more likely to push users towards 4G LTE Android phones instead of the iPhone. The reason for the push seems solely because of the iPhone’s lack of 4G LTE. The iPhone only works on Verizon’s 3G network, which is much slower than its 4G LTE network.

One Verizon employee was even quoted as saying “The iPhone is a great phone, but it’s on 3G. I’m not going to recommend a phone that’s outdated.”

The employees are pushing customers looking for a new smartphone towards the Droid RAZR, RAZR MAXX, or even the LG Lucid instead of the iPhone 4 or 4S. It’s not that the reps won’t sell the iPhone, they just don’t seem to recommend it. 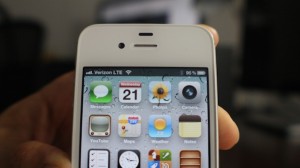 The trend is an interesting one, and one that seems strangely similar to AT&T employees pushing the iPhone after the Lumia 900’s launch. The only difference is that Verizon employees put down the iPhone while AT&T employees promote it. The iPhone 4S is faster on AT&T’s network, but the company also has 4G LTE device to sell, albeit on a smaller 4G LTE network.

The Verizon reps could also be pushing Android over the iPhone because the carrier pays more upfront subsidies for the iPhone than it does for Android phones. We’ll have to wait for an iPhone 5 with 4G LTE to come out before we can know for sure. When it does, Verizon reps will theoretically have no problem recommending the iPhone.