If you’re a Verizon customer looking to join the 5 million owners of Samsung’s latest phablet, the Galaxy Note II, then you’re in luck as the carrier of your choice has started shipping the device, which is scheduled to arrive to customers who pre-ordered by Thursday. According to a report on blog Phone Arena, select customers have begun receiving email notifications that their phablets have started to ship and that delivery is scheduled for Thursday.

For those who want to order at retail stores or want to play with the device before committing to a two-year contract, the delivery date may mean that the Note II will start appearing in retail stores by Thursday or Friday.

With the Thursday delivery, the Note II will be Verizon Wireless’ third phablet following the competing LG Intuition 4G and the recently launched HTC Droid DNA. The Intuition 4G has a slightly wider display aspect ratio similar to what LG has been using for the Optimus G as well as for the Nexus 4 for Google. The Droid DNA has a smaller 5-inch display with more pixels packed in as that device has a full 1080p HD resolution display. And the Galaxy Note II has the largest display of the bunch with a 5.5-inch 720p HD resolution screen. 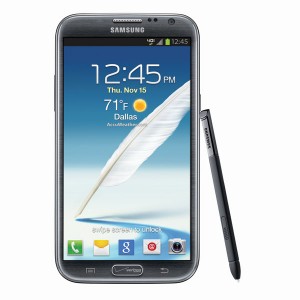 The Galaxy Note II is also more widely available in the U.S. as it is available on all four major U.S. carriers, including AT&T Mobility, Sprint Nextel, T-Mobile USA, and now Verizon Wireless.

The device will retail for $300 with a two-year service agreement and $700 without. It has a removable battery, NFC, 4G LTE network connectivity alongside a quad-core Samsung Exynos processor, micro SD card slot for expansion, and the plethora of software and customized apps with Samsung’s TouchWiz UI. Additionally, the Note II will come bundled with an active digitizing stylus, which fits in a slot on the phone.