Yesterday, I made my choice. I was going to be picking up Verizon’s 4G LTE and Android 4.0-powered Samsung Galaxy Nexus. Believe me, the decision was not easy. You see, I’ve been month-to-month with AT&T since my contract ended in August which was a terrible time (or awesome depending on how you look at things) for me and my iPhone 3GS to come off contract.

There are a ton of compelling phones on the market right now. The HTC Rezound, the Motorola Droid RAZR, the iPhone 4S, just to name a few.

Well, the debate that had waged on for four months ended peacefully yesterday when I finally decided to make the Galaxy Nexus mine.

This morning, I took a trip down to my local Verizon store to grab it and lo and behold, I stumbled onto what I think was probably the busiest Verizon retail store in the U.S. I literally had to wait for forty minutes to get my new phone. The guy helping me said that this was the busiest the store had been since the launch of the iPhone 4S.

Apparently no one had showed up for the launches of the HTC Rezound or Motorola Droid RAZR.

Anyway, I was lucky. The rep told me that the store only had 20, seriously, Galaxy Nexus’ in stock and that I was getting one of the last ones. There were definitely people in the store that were going to walk out empty handed.

Of course, they’ll probably just go home and order it from Amazon for $150, but they’ll have to wait a week or so before it arrives.

So I am now the proud owner of a new Galaxy Nexus and I wanted to share my thoughts and impressions with all of you.

Keep in mind, these are coming from someone who has used an iPhone 3GS as his main phone for 2+ years. 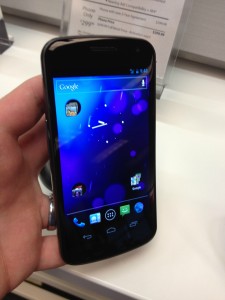 The first thing that I noticed about the Galaxy Nexus, before I even booted it up, was how big it is. It is massive compared to the 3GS and certainly dwarfs the iPhone 4S as well. If you have small hands, it could present problems.

Lucky for me, I was blessed with massive hands and holding the phone isn’t a problem for me. In fact, the Galaxy Nexus is extremely nice to hold. It’s not bulky, even for a 4G LTE phone, and while I’m certain it will take awhile to get accustomed to, it has already started to grow on me.

Design-wise, the Nexus is simple. It’s not flashy at all. I like that. If there is one thing that Samsung does well, it’s build amazing hardware. The Galaxy Nexus is clearly an amazing piece of hardware. Yeah, it would have been nice if it was built with metal but the plastic back on the Nexus does not make it feel cheap. At all.

The screen is honestly one of the best parts about this phone. The colors are vibrant. The content I’ve pulled up thus far looks gorgeous. And I can’t wait to watch a movie, on Netflix, on BART, in HD.

I like how the rear camera is in the middle and not on the side or in the corner. And those of you worried about the “lowly” 5MP count need not worry. This is very serviceable camera.

The speakers and phone call quality seem to be par for the course as well.

The only thing I don’t like is how the power button is on the side but that’s just being nitpicky.

As soon as I booted it up, I was prompted to download a software update. Some people are saying that it takes a couple of hours after activating to see the update. I got it right off the bat. The update, Android 4.0.2, brings a couple of things along with it including some improvements to the lockscreen and some notification bug fixes.

The update took a couple of minutes and then I had a device, with a vanilla version of Android 4.0 at my finger tips. Needless to say, I was excited.

First thing that you’ll notice is unlike other Android phones, the the Galaxy Nexus has no physical buttons. Instead, the buttons are baked into Android 4.0. I love it. The three buttons, which include a Back arrow, Home button and a button for Multitasking, are both snappy and useful. In addition, the lack of  physical buttons makes for a much prettier piece of hardware.

If you’ve ever used an Android device, you know that they can be sluggish, even with their powerful hardware. I experienced it on the Droid X2 and Droid 3 (both dual-core) and I even noticed both the Droid RAZR and HTC Rezound stumble on occasion.

I’m not a software engineer but I think it’s fairly safe to say that a lot of the blame has to be placed on the custom UI’s that the manufacturers put over Android. HTC Sense and MotoBlur can be useful but they also turn Android into a bigger resource hog then it already is.

The Galaxy Nexus has no such UI. It’s a pure, vanilla version of Android 4.0.

I zipped around menus. I was able to quickly switch from app to app. The browser was reliable and fast. Far more enjoyable than any experience I’ve ever had on an Android phone.

And this was in the first 20-30 minutes of owning the phone.

I turned on another Android phone and I am being serious, I actually laughed at Gingerbread. Ice Cream Sandwich blows it out of the water.

The biggest allure to the Galaxy Nexus, besides the fact that it was a Nexus, was that the phone had 4G LTE speeds. I can’t tell you how many times I’ve been using my iPhone 3GS, outside of a place with Wi-Fi, and wished I had LTE data speeds.

And now, I finally have them and they do not disappoint.

Loading up webpages is a dream. Netflix is fantastic. I don’t know how I could ever go back to 3G now.

I have been pulling, consistently, around 17mpbs download and 14mbps upload. The best word I can use to describe that is insane. I know I won’t be able to pull down those speeds everywhere but when I’m able to, satisfying is an understatement.

Impossible to tell at this point. I’ve been borderline torturing this thing since I got it and so far, my battery has dropped from an initial 52% to 40%. Not bad, but it’s way too early to call it good or bad.

We’ll touch on this extensively in our full review.

I also decided to pick up the extended battery for the Galaxy Nexus which brings it from 1850mAh to 2100 mAh. I’ve only had the phone for a couple of hours so I have no real gauge yet on the differences in battery life but I will say this.

This one does not.

I’ve only had this phone for about an hour and a half and already I am feeling very, very good about my decision to buy it. It’s going to take some time getting used to the size of it and a brand new operating system but so far, so good.

Android 4.0 is snappy. The hardware is up to snuff. 4G LTE is fast.

In short, the Galaxy Nexus is everything that I wanted it to be. So far at least.

How is day one for all of you? Any of you having a similar experience?