Verizon has approved the Samsung Galaxy Nexus Android 4.0.4 update which means that the software should be rolling out Over-the-Air to device owners soon.

As expected, the 39MB update is going to come with several fixes for the device including fix for the device’s audio issues that have been plaguing users for months on end. 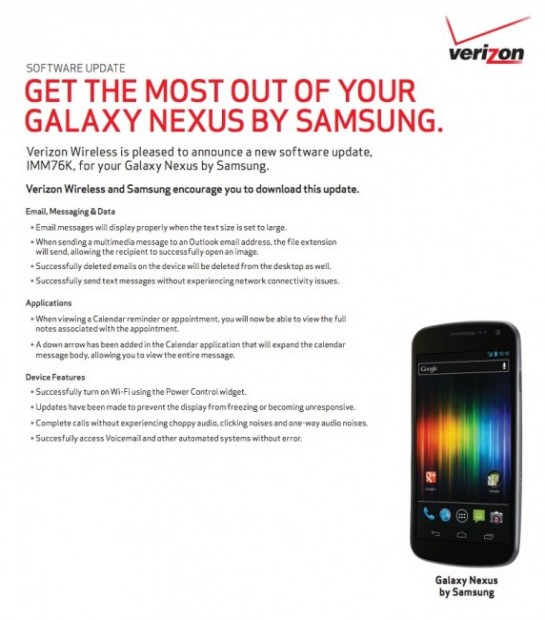 Verizon also says that the update will take care of the freezing and response issues that Galaxy Nexus owners have been dealing with.

This update has been a long time coming for Verizon Galaxy Nexus who have been waiting for over five months for Verizon to roll out Android 4.0.4.

The road to the update has been a treacherous one for some with some Galaxy Nexus owners paying their ETF fee and leaving Verizon altogether.

Those that stuck it out should be greeted with an OTA update in the not-so-distant future, possibly as soon as today. Those that want to check will want to go to the Settings on the Galaxy Nexus, then to About Phone  and then System updates to check for the software.

Once available, users will be prompted to download software which, because of its size, shouldn’t take too long to download.

Now that the update is finally coming out, do you feel relieved Galaxy Nexus owners?

Also, be sure to let us know when you see the update.