It looks like we might finally have our first look at one of the Samsung Galaxy Note 2 variants coming to the United States as the Verizon Galaxy Note 2 seemingly leaked out showing off its branding, its design, and a quick look at its software.

Engadget uncovered two photos of what appear to be the Verizon Galaxy Note 2 in the flesh, a device that’s rumored to be coming to Verizon’s 4G LTE network sometime later this year.

The photos depict the 5.5-inch device sporting not only 4G LTE branding but Verizon branding as well. We also clearly see that it’s the Galaxy Note 2 and we also get a quick glimpse at its home screen. 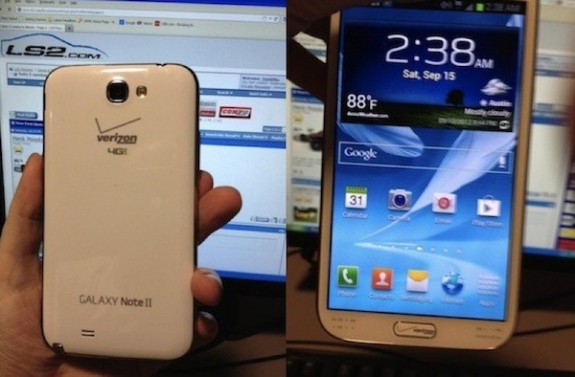 There’s also a Verizon sticker on the home button which may just be there because this is a test device. It’s also entirely possible that these photos are fake but right now, there is little evidence to suggest that that is the case.

Whether or not this is the real deal doesn’t matter too much as we’re fairly certain that the Verizon Galaxy Note 2 is coming to Big Red at some point later this year. Leaks suggest that a model called SCH-I605, a device which appears to be a handset running Android 4.1.1 Jelly Bean, will be heading to Verizon.

The rumored was backed up the screenshot with a listing from a handset detection archive and a couple of Flickr pages where photos were uploaded using this smartphone.

In addition, to Verizon, the Galaxy Note 2 is rumored to be heading to AT&T, Sprint, T-Mobile and U.S. Cellular. All five U.S. carriers offer the Samsung Galaxy S III, another high-end Samsung smartphone.

AT&T’s Galaxy Note 2 is rumored for an October 21st launch which falls in line with the Galaxy Note 2’s announced October launch. The other four devices still don’t have a rumored release date though we imagine Verizon and the others won’t launch their device too much long after AT&T.

So, assuming this is real, is this Galaxy Note 2 your next device on Verizon?