While Verizon has yet to reveal any details in regards to its Samsung Galaxy Note 2 release date or pricing, we have heard that the carrier might be taking pre-orders for the Galaxy Note 2 starting at midnight tonight.

We have been informed by a reader who claims that multiple Verizon customer service representatives told him that pre-orders for the Samsung Galaxy Note 2 will begin tonight at midnight. Verizon hasn’t announced anything yet so that definitely remains up in the air. But, given the fact that the Samsung Galaxy Note 2 event will be taking place later today in New York City, it’s not out of the question.

The price of $299.99 was also apparently confirmed by several different representatives.

What’s more is that he was apparently told that the Verizon Galaxy Note 2 might not start shipping out until late November, specifically, November 29th. Apparently, it might have some sort of tie in with Black Friday. That seems way more outlandish than a pre-order starting at Midnight tonight and it could be that the customer service representative is confused. It could be that it ships out on October 29th, instead. 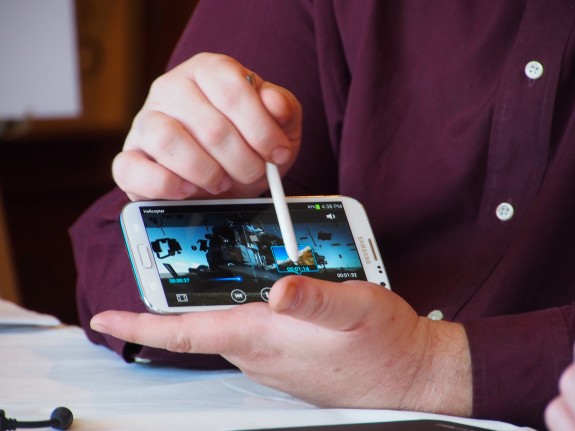 Of course, it remains a possibility given that Verizon hasn’t released any sort of information regarding the Galaxy Note 2, even while its competitors have. In fact, T-Mobile already launched the Galaxy Note 2, today, for $370 on-contract.

As for the others, Sprint plans to release its Galaxy Note 2 tomorrow, October 25th, while AT&T is slated to start taking pre-orders tomorrow with a release date slated for November 9th. U.S. Cellular, the remaining Galaxy Note 2 carrier, said that it would begin shipping its Galaxy Note 2 in October though it has yet to give out a specific release date for the phablet.

So, at this point, take the Verizon Galaxy Note 2 pre-order and the shipping date especially with a grain of salt. It’s possible that these consumer reps are confused and we already saw an AT&T rep pass off the Galaxy Note 2 pre-order date as the release date so it could just be another case of misinformed customer service reps.

Or, it could be that Verizon really isn’t planning on releasing its Galaxy Note 2 until late in November. Remember, Verizon released its Galaxy S III later than most of the other carriers so it might do the same with the Galaxy Note 2.