Verizon has pushed out what appears to be a new software update for the Samsung Galaxy Note 2 and while its not explicit about what the update does, Verizon’s wording seems to suggest that it’s a fix for the Exynos processor exploit that has been tackled by several other carriers in recent days.

According to Verizon, the Galaxy Note 2 is now receiving its first software update. However, before Galaxy Note 2 owners on Verizon get too excited, the update isn’t going to be bringing any new functionality or features along with it. It’s also not Android 4.2. Instead, it’s a security patch that Verizon describes as an “Android Security Patch.” It doesn’t elaborate.

And while it doesn’t, we can. This is going to be a patch for the Exynos exploit that cropped up on devices powered by Samsung’s processor in the past year. The exploit allowed  created opportunities for malicious users to take control of a Samsung smartphone using a Exynos processor and potentially brick the phone, wipe data or steal information. Samsung promised fixes for devices affected and we saw those software updates roll out in the U.S. earlier this month.

The Verizon Galaxy Note 2 got a security update today.

Beating Verizon to the punch were Sprint, which updated its Samsung Galaxy S2 Epic 4G Touch and T-Mobile, which patched up its Galaxy Note 2 using a software update of its own. 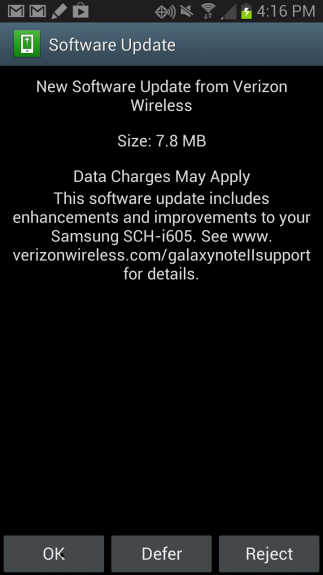 Verizon Galaxy Note 2 owners who are unrooted with a locked bootloader and concerned about this exploit will want to install the update. Those who are rooted, with an unlocked bootloader may want to hold off though given the dangers of the exploit, it might be worth making the upgrade.

Those with a Galaxy S3 in the United States should not be on the look out for the update as the device does not use Samsung’s Exynos processor and instead uses Qualcomm’s Snapdragon processor which is unaffected by the exploit.

Verizon Galaxy Note 2 owners who wish to update at this time should head into the device’s settings, in to the about section, and check for an update. It should be there. If it’s not, look for a prompt to emerge down the road.