Verizon has posted the Samsung Galaxy S3 Android 4.1.2 to its website, a sign that the update will be rolling out soon, but those hoping for the arrival of the Premium Suite are likely going to be sorely disappointed as the update doesn’t appear to be bringing along Samsung’s software. 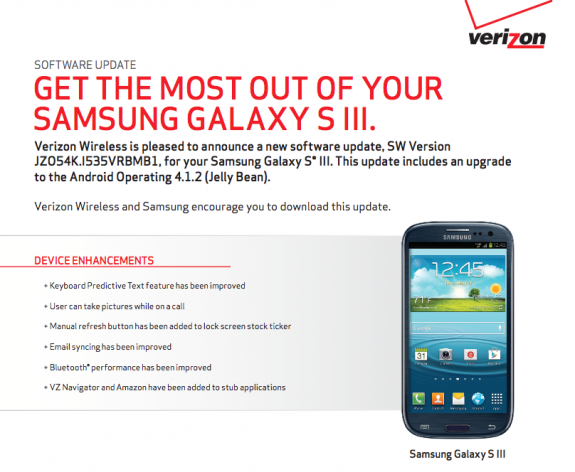 The update’s changelog has been posted to the page as well and it reveals a number of enhancements and bug fixes. However, it’s looking like the update will be rolling out without the Premium Suite from Samsung that many owners have been looking forward to.

Here is what is supposedly coming with the 150MB Verizon Galaxy S3 Android 4.1.2 Jelly Bean update:

No where are the features from Samsung’s Premium Suite listed though given that the update is 150MB in size, it could be that Verizon is going to surprise owners of the device. At this point though, because none of those features are listed, Verizon Galaxy S3 owners should not expect the Premium Suite of features, which includes the Galaxy Note 2’s Multi-Window View with this update.

Sprint rolled out its Android 4.1.2 update but like the Verizon Galaxy S3 update, it did not have the Premium Suite. AT&T, U.S. Cellular and T-Mobile may follow suit as well but at this point though, that is unconfirmed.

It’s unclear when this update might roll out but typically we see software move out to owners shortly after it appears on Verizon’s website.