Just a few weeks after putting it on sale, Verizon has dropped the price of the Samsung Galaxy S4 32GB down $50 from its starting price of $300 to a more affordable $250 something that should delight those that are still in the hunt for a new device.

At launch, like many other U.S. carriers, Verizon chose to only announce a 16GB version of the Samsung Galaxy S4. In the weeks after its launch, AT&T was the only carrier offering a 32GB Galaxy S4 to power users needing more storage. While it initially said that it would be sticking with the 16GB Galaxy S4 and the 16GB Galaxy S4 only, Verizon ultimately decided to unleash a 32GB model, something that we exclusively reported prior to the announcement. 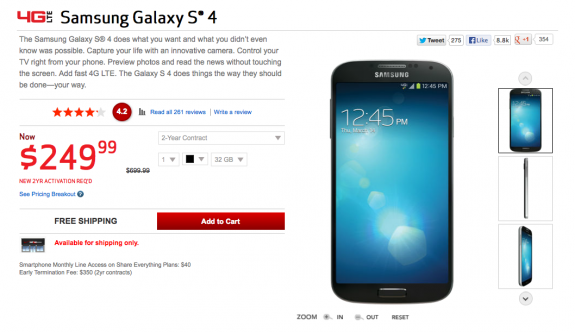 The price did come with a $50 mail-in rebate but it appears that Verizon has done away with that, at least for those shopping through its online marketplace.

The carrier has dropped the price of the Galaxy S4 32GB down to a more affordable, more competitive price of $250 on-contract, without the mail-in rebate. That’s still $50 more expensive than the Galaxy S4 16GB but it puts it on par with the 32GB model through AT&T. This is a victory for those in the market for a new smartphone as it means that the 32GB Galaxy S4 is much more attractive than it once was.

With 32GB of internal storage space, Verizon Galaxy S4 users can expand to get up to 96GB of storage thanks to a 64GB microSD card. That’s a ton of space and is particularly enticing to those that take a lot of photos or play a lot of games.