In October, Verizon pushed out the Samsung Galaxy S4 Android 4.3 Jelly Bean update to its users, becoming one of the first carriers in the United States to do so. Today, the carrier has pushed out the first Galaxy S4 Android 4.3 Jelly Bean bug fix update, an update that appears to be aimed at tackling some of the issues that cropped up after Verizon pushed the update live.

Back in October, Samsung confirmed Android 4.3 updates for the Samsung Galaxy S4, Galaxy S3 and the Samsung Galaxy Note 2. Shortly after that, the company started rolling out the update to international versions of the Galaxy S4. And shortly after that, Sprint and Verizon surprisingly rolled out their Galaxy S4 Android 4.3 Jelly Bean updates, updates that came much faster than expected.

The update is build JSS15J.I545VRUEMK2 and it keeps the Galaxy S4 on Android 4.3. The update is relatively small but it packs a fairly big punch, delivering these enhancements to Galaxy S4 users:

Now, these are just the fixes that Verizon has listed. Typically, software updates will smooth over other issues without advertisement so it’s possible that this update will help stabilize the software and fix other Android 4.3 bugs or issues as well. It’s also possible that it will deliver some bugs of its own though it’s far too early to tell if that’s the case. 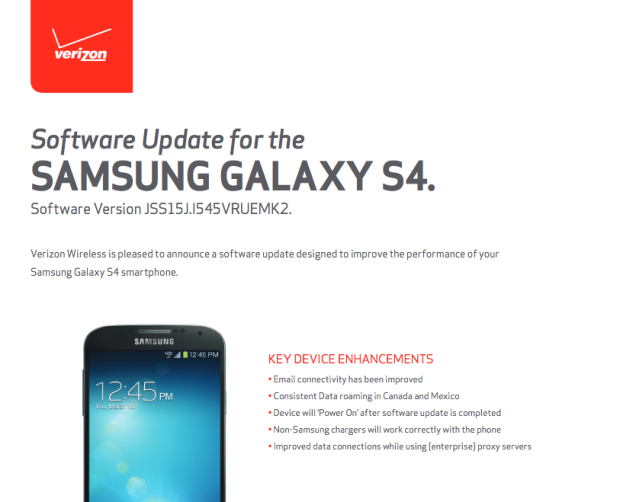 This update now means that the Galaxy S4 has received two Android 4.3 Jelly Bean updates before Verizon’s Galaxy Note 2 and Galaxy S3 have received one. Both devices remain on Android 4.1 Jelly Bean as they await their upgrade to Android 4.3.

Unfortunately, Verizon has not said when it plans to outfit either device with Android 4.3 Jelly Bean, Samsung KNOX and support for the carrier’s Samsung Galaxy Gear smartwatch accessory.