Earlier today, we reported on a listing that Samsung placed on its website for the Verizon Galaxy S4 Android 4.3 Jelly Bean update, an update that was rumored to be rolling out today. And while Samsung offered up some of the update’s details, it did not offer up a full changelog for the update, instead, leaving that for Verizon to deal with.

From the link on Samsung’s listing, users are able to view an extensive changelog for the Verizon Galaxy S4 update, an update that will not only be bring Galaxy Gear support along with it but a number of other features as well. 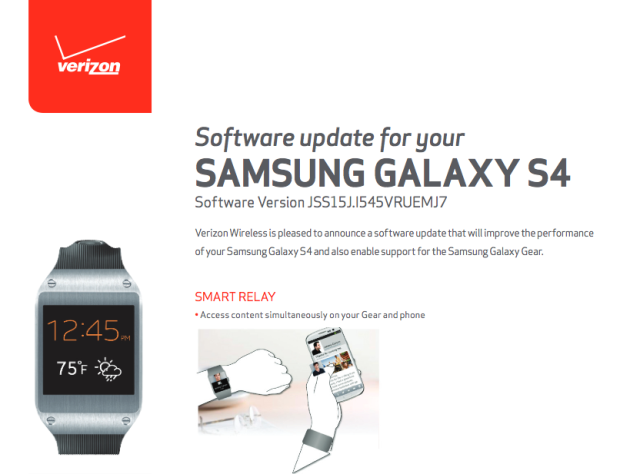 The changelog suggests that Verizon’s 300MB+ update for the Galaxy S4 will come with fixes to Weatherbug, a fix for video app crashes, a fix for a call audio issue, Blocking Mode, and Starter Mode has now been renamed to Easy Mode. We imagine that there are some other features and enhancements on board as well as changelogs don’t always reveal everything about an update.

It’s still not clear when the Verizon Galaxy S4 Android 4.3 Jelly Bean update will be rolling out though given that Samsung said it would be rolling out today, it’s possible that we could see it start rolling out before the day is over. Verizon still hasn’t confirmed anything but the fact that it has posted a changelog to its website is a sign that something is close. 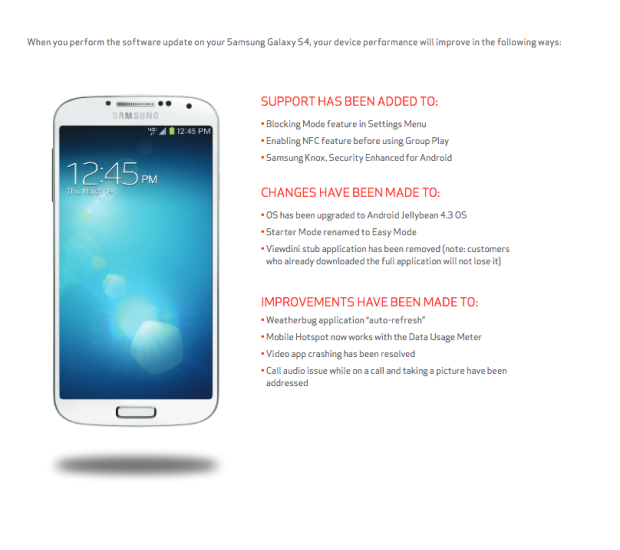 The update, when it does finally roll out, will emerge Over-the-Air for owners of the Galaxy S4. It’s not clear if the update will roll out to all Galaxy S4 owners at the same time or if it will roll out in stages. Often, Verizon will release software incrementally with some owners getting the software on the first day of availability and others, getting the update several days down the road.