The Verizon Galaxy S4 Mini isn’t official quite yet but it has come roaring out of the unofficial gates with a few images that show it posing for the camera next to Apple’s iPhone 5.

In June, Samsung announced a new version of its flagship Samsung Galaxy S4, the smaller Samsung Galaxy S4 Mini, a device that has since arrived in various regions around the world to compliment the larger smartphone. The device, which sports a smaller 4.3-inch display, has yet to make it to the United States though it looks like that may change soon.

Read: Verizon Galaxy S4 Mini Could Be in the Works. 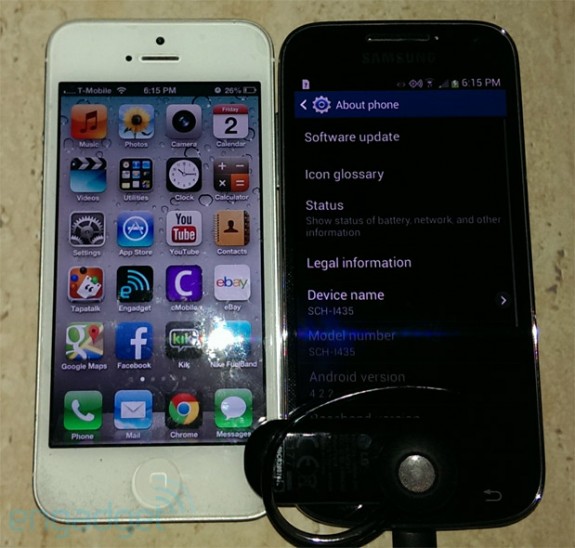 This is said to be the Verizon Galaxy S4 Mini.

Rumors have suggested that Verizon, at the very least, will be carrying the Samsung Galaxy S4 Mini at some point down the road and now, thanks to Engadget, we know that a launch may very well be in the cards.

The Verizon Galaxy S4 has finally leaked out to the surface it seems, ahead of an unknown launch date. The device, which is sporting Verizon branding, shows off a form factor and specifications that put it on par with the current Galaxy S4 Mini models.

As a bonus, the device has also seen it fit to pose next to the iPhone 5, Apple’s current flagship, to give buyers an idea in regards to its size. While the Galaxy S4 towers over the iPhone 5 with its 5-inch display, a whole inch bigger than the iPhone 5 display, the Galaxy S4 Mini is much closer in size.

The photos come on the heels of a Bluetooth filing for a SGH-I435, same model number seen here, and rumors that suggested that Verizon would be taking on the smaller Galaxy S4, likely in an effort to compete against the HTC One Mini.

HTC’s One Mini is expected to hit the United States at some point soon with AT&T one of its likely destinations. There is currently no word on a Verizon HTC One Mini though rumors suggested that if Verizon did decide to release one, it would not be available at launch.

As for the iPhone 5, it’s thought to be getting replaced in the near future by a iPhone 5S, a device that is said to have an improved processor and camera, but be keeping the same design as the iPhone 5.