While the Verizon Galaxy S4 is currently up for pre-order at at least one premium retailer and at Best Buy, the official pre-order from Verizon has yet to begin. That will change tomorrow however when Verizon finally puts its the device up for pre-order ahead of a release date that isn’t set to arrive until May 30th.

Verizon today announced the availability of the Samsung Galaxy S4, confirming a pre-order for tomorrow while also confirming an in-store release date for May 30th, the date that had popped up in a previous leak. That date of course comes long after several of the other scheduled release dates for the Galaxy S4 in the U.S. and means that Verizon customers will likely be waiting for quite awhile, if they don’t pre-order. 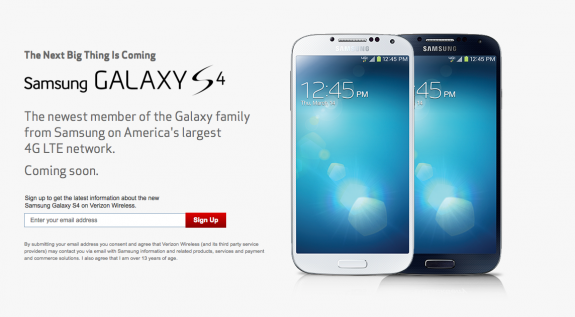 The Galaxy S4 will hit Verizon on May 30th.

Verizon has not said when pre-orders will be shipping out but as we’ve seen, there is a chance they could arrive earlier than in-stores. Carriers typically have two different release dates, in-store and online and it could be that Verizon’s online date comes sooner. We just aren’t sure yet and the carrier isn’t saying one way or another.

Verizon will be offering the Galaxy S4 for $250 on-contract but with a $50 mail-in rebate. That means that buyers will need to put that rebate in a safe place in order to get the price discounted to $199.99. Verizon has not said if it will offer the elusive 32GB Galaxy S4 and so that still remains in limbo.

The pre-order through Verizon will start tomorrow but it won’t be the first time the device has been up for pre-order. Best Buy is currently taking pre-orders and at least one premium Verizon retailer is also taking pre-orders.

It’s clear now why Verizon waited before making details official. Carriers like T-Mobile and Sprint have been forced to push their release dates back due to inventory issues. It’s not clear why Verizon’s in-store release date is so far off but again, it’s possible that pre-orders will arrive much sooner than that.

Verizon’s Galaxy S4 will feature 4G LTE data speeds to go along with a 5-inch display, quad-core processor, 13MP camera, Android 4.2 Jelly Bean and Samsung’s new smart features. It’s not clear yet if its bootloader will be encrypted or not though it’s to be expected.