Verizon Galaxy S4 Sign Up Live, No Pre-Order Yet

Just a day after Verizon confirmed that its Samsung Galaxy S4 release date would fall in May, the carrier has put up a sign up page for those interested in buying its Galaxy S4 when it does go on sale. Unfortunately though, the sign up page was not accompanied by the arrival of a pre-order for the device.

While many other U.S. carriers have confirmed information in regards to the Samsung Galaxy S4, Verizon Wireless has been relatively quiet about its version of the 5-inch, 1080p smartphone. That is, until yesterday, when Verizon finally confirmed that the Galaxy S4 would be arriving at some point in May, though it does not yet have a specific release date. 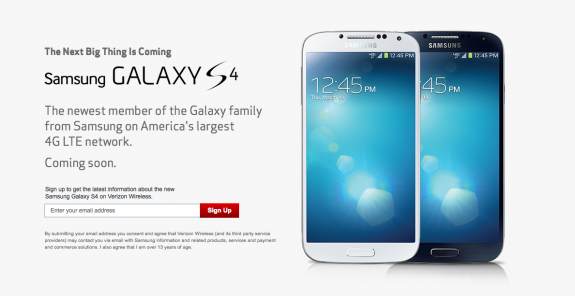 The Verizon Galaxy S4 sign up page is live.

Today, Verizon has taken another step towards release with the debut of a sign up page for the official Galaxy S4 which will allow prospective buyers to sign up to get more information in regards to the device’s release. The arrival of this sign up page did not bring a pre-order for the device and there is still no date set for a pre-order, if one does arrive.

AT&T, U.S. Cellular and Sprint are currently taking pre-orders for the device while T-Mobile seems content on simply releasing the Galaxy S4 on April 24th, potentially ahead of the other carriers.

So far, release dates include April 24th for T-Mobile, April 27th for Sprint, and potentially April 23rd or April 24th for AT&T which recently moved up its shipping time for the device from April 30th to April 23rd. U.S. Cellular, which is also taking pre-orders, has declined to offer a specific date other than to say it will arrive by the end of April. 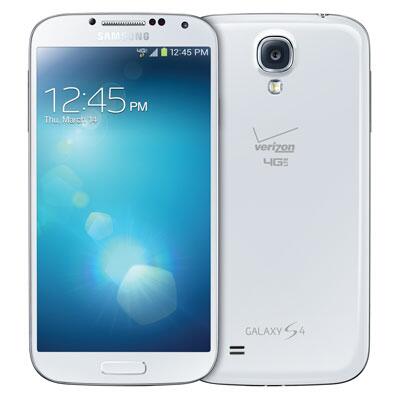 This is the Verizon Galaxy S4.

This likely means that Verizon will be the last major U.S. carrier to offer the Galaxy S4 as it plans to offer it sometime in May. Rumors have suggested that the arrival could come as late as May 30th. Verizon is hosting some sort of launch event on May 22nd at CTIA in Las Vegas though its unclear if that is connected in any way to this device.

The carrier has also been rumored to be announcing the HTC One, a Lumia 928 and a Motorola X Phone which could arrive at Google I/O shortly before that event.

Whatever the case may be, Verizon is moving fast towards its Galaxy S4 release date.