The Ice Cream Sandwich update for the Samsung Galaxy Tab 10.1 is rolling out to owners of the Verizon version of the tablet right now.

Verizon announced today that the Android 4.0 software roll out is underway for Galaxy Tab 10.1 owners and that the update will be rolling out slowly in phases. When Verizon makes posts like these, it usually means that an official soak test is currently rolling out which means that some owners will be used as guinea pigs to ensure the software is functioning properly.

If the software is deemed to be performing up to par, then the software will roll out to the masses. This generally takes a few days so owners of the Galaxy Tab 10.1 should remain patient. 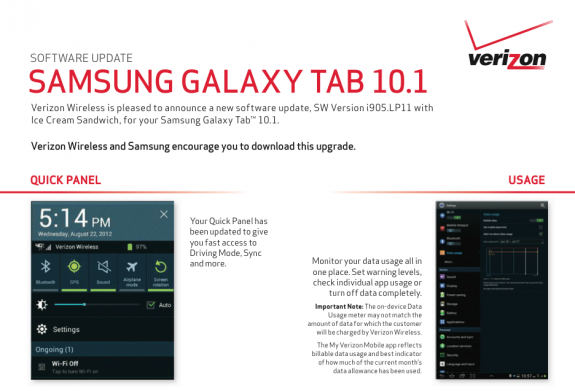 The Verizon Galaxy Tab 10.1 ICS update is rolling out now.

The Samsung Galaxy Tab 10.1 follows in the wake of the Droid Xyboard and Motorola Xoom Android 4.0 Ice Cream Sandwich updates which rolled out earlier this year.

Android 4.0 Ice Cream Sandwich is going to bring a number of features and enhancements that should make the experience a much better one than Android 3.0 Honeycomb.

The software features a new user interface, a redesigned Gallery application or photos and video, a Data Usage widget, an improved Browser, Face Unlock and more.

Users should also see some bug fixes for issues that they may have been experiencing with the software prior to the update.

Those who are interested in getting Ice Cream Sandwich up and running will want to check in the device’s Settings, in the About section, where the Check for Update feature might prove fruitful.

If it’s not there, the software may pop in a prompt asking for the user to download and install.