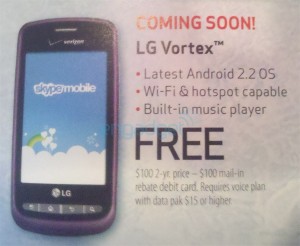 Despite canceling a feature phone body with a smartphone brain in the enV Touch 2, Verizon Wireless is getting aggressive on its Android smartphone lineup by offering the newly announced LG Vortex for free on a two-year service agreement. Verizon’s LG Vortex looks to be a branded edition of LG’s Optimus series smartphones, which target the low-end to mid-range smartphone demographics with some respectable specs. Verizon Wireless is pricing the CDMA Vortex for $100 on a two-year service agreement with a $100 mail-in-rebate. The downside is that like the carrier’s Fascinate, a variant of Samsung’s Galaxy S series, the lack of true Droid branding means that you’ll get Microsoft’s Bing service integration for search rather than Google’s native services as a carrier customization, according to Engadget.

With carriers and manufacturers getting aggressive on smartphone pricing–Sprint, T-Mobile, and Verizon Wireless are offering great entry level phones for very affordable prices for the U.S. market–Android’s adoption should begin to pick up. Android market share in the U.S. has just outgrown the popularity of iOS, but the market is divided between multiple makers of Android phones. With more low-cost smartphones on the market, there will be greater value proposition for those who need to stay connected all the time or those who are lured by the appeal of an app store for readily downloadable media, games, content, and apps on the go. With combined functionality of an e-reading device, a mobile browser, and a growing app catalogue, low cost Android phones may help to lead the migration from feature phones to smartphones.