Yesterday, the Droid DNA from HTC disappeared from Verizon’s website. Today, the device has appeared once again, returning to the Verizon store, a move that has left more questions, about not only the Droid DNA, but the rumored HTC One, than ever before.

Just a few short hours ago, the Droid DNA vanished from Verizon’s website without a trace. The device was unavailable and those looking to snag it online were unable to, at least through Verizon. Right around the time of its disappearance, the notorious @evleaks claimed that the HTC One, long rumored for Verizon, would indeed be heading there. 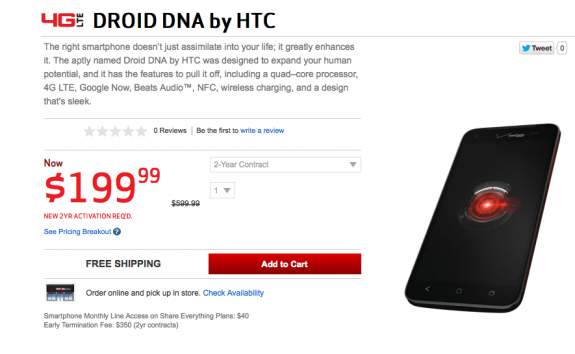 The Droid DNA is back, which thickens the Verizon HTC One plot.

This led us to believe that, like many other outlets, that something could be close in regards to the Verizon HTC One launch. However, just a few hours after the Droid DNA vanished, it has reappeared on Verizon’s website without any sort of explanation. The device is indeed available to purchase and we were able to progress to the point of buying it, meaning it’s in stock.

And while this is good news for those that may have wanted to buy it, it leaves quite a few questions for those that have been following the situation regarding the Verizon HTC One.

For one, the Droid Does website’s Droid DNA splash page still doesn’t lead anywhere, much like it didn’t yesterday. That could just be a broken link but it’s an odd one. Second, it’s not common to see a big time phone just up and vanish from a carrier website unless the carrier is planning to get rid of it in favor of something new.

This page still leads to no where, oddly enough.

Verizon hasn’t commented about the Droid DNA’s disappearance but it’s looking like the ID number for the Droid DNA, called an SKU, has changed. It’s unclear what this means, if anything.

What this means is that, for now, the Droid DNA is still available on Verizon’s site with a broken link on Droid Does. And because of that, it’s unclear if the Verizon HTC One launch is coming soon. All signs point to Verizon getting the device at some point to replace the Droid DNA but given the Droid DNA’s reemergence, it doesn’t look like it will come as soon as was once thought.