Verizon HTC One Release May Be in the Works

The HTC One, which is rumored to be hitting the United States on March 22nd, won’t be heading to Verizon on that day as it wasn’t among the carriers that confirmed it for its network. However, the Verizon HTC One may launch under a different name, possibly as a Droid DNA variant and there is more evidence that suggests that that very thing might occur.

Read: Verizon HTC One Said to Be in Testing, Release Pegged at 3-4 Months.

In mid-February, HTC announced the new HTC One, a device that is set to replace the HTC One X+ and the HTC One X as the company’s flagship Android smartphone. The device will be hitting shelves in some markets on March 15th, however, at this point, the United States doesn’t appear to be one of those regions. 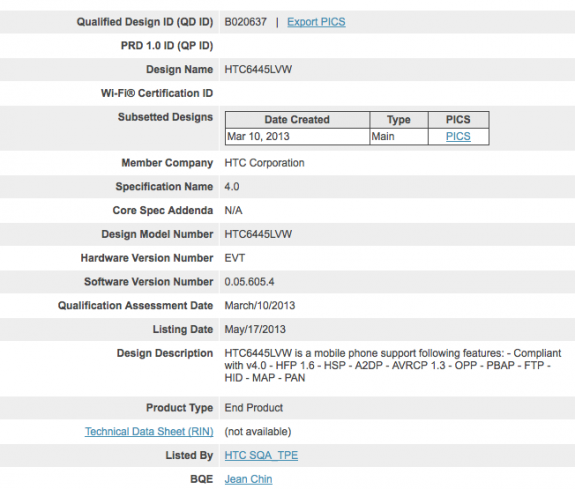 This filing could be for Verizon’s HTC One.

AT&T, Sprint and T-Mobile, all of which have confirmed the HTC One for release, will be getting the device in March but it’s unclear as to the specific date. March 22nd has been rumored but hasn’t been confirmed just yet. Those three carriers, in addition to Cincinnati Bell, will likely be the only place that the HTC One arrives at launch though they may not be the only places that garner an HTC One variant.

Rumors have suggested that a Verizon HTC One is in the works for later this year though it may not be released as the HTC One. A new Bluetooth SIG filing, found by Blog of Mobile, reveals a device called the HTC6445LVW. VW stands for Verizon Wireless and the rest of the device mirrors the HTC6435LVW name for Verizon’s current HTC flagship, the Droid DNA.

So, it could be that this new phone is some variant of the Droid DNA series, possibly the Droid DNA 2. It also could be a different phone entirely, the Bluetooth filing doesn’t reveal much other than its destination and the fact that it has LTE on board.

Read: HTC One Hands On and HTC Sense 5.

A reliable source has said that Verizon’s HTC One could be months away from arrival so while this filing may indeed be the HTC One variant for Verizon’s network, it may be months before we see the fruits of it.

Previous rumors have suggested that Verizon’s HTC One, or Droid DNA 2, would feature similar specs to the HTC One that is said to debut later this month. If true, that would mean a 1080p display, quad-core processor, Android Jelly Bean, and likely an Ultrapixel camera as well.