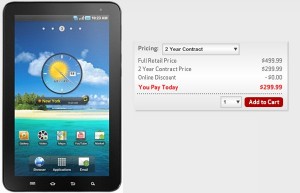 When the Galaxy Tab was launched on Verizon, the carrier, like rival AT&T, was one of two to offer the tablet offering only a contract-free offering. While this mean that you can activate and cancel your mobile broadband data at any time, and re-activate data without penalties, it also means that users will have to pay the full device price for the tablet as no contract is signed. However, Verizon changed its tone with tablet subsidization with the Xoom by offering $200 off the suggested retail price of the tablet with a 2-year contract and minimum $20 1 GB data plan per month. It’s following in that tradition with the Samsung Galaxy Tab by offering $300 off the 7-inch Android 2.2 Froyo slate with the TouchWiz UI to bring the price down to $300 with a 2-year contract.