It’s hard to believe that the HTC Thunderbolt, a smartphone that’s well under a year old, was the first smartphone to grace Verizon’s 4G LTE network. In the short time of the Thunderbolt’s existence, we’ve seen numerous phones launch and even the first Google Nexus launching on Verizon in the form of the Galaxy Nexus. That said, Verizon has still not forgotten about Thunderbolt owners and the carrier is working with HTC in preparing an over-the-air software update that will be delivered soon. The update takes the software on the Thunderbiolt to version 2.11.605.9 and brings with it a number of bug fixes, system improvements, and a new radio ROM for better network connectivity. 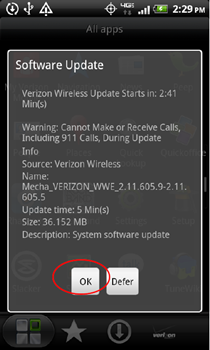 Here are some of the things that the update will either bring with it or fix:

It’s still unclear when Verizon Wireless will begin pushing the update out. The update is expected to come in at 36 MB. Eager users can begin to manually check for the update and hope that it comes ahead of a massive push to devices from the carrier.

Unfortunately, this update won’t bring the Thunderbolt up to Android 4.0 Ice Cream Sandwich.