Similar to the Bluetooth SIG listings that confirmed the AT&T and T-Mobile USA variants of Samsung’s third-generation flagship Galaxy S III yesterday, now we have confirmation of Verizon’s variant. According to the Bluetooth Special Interest Group (SIG), the regulatory body for Bluetooth radio approval, we also have confirmation of Verizon’s listing, which lists the CDMA phone model SCH-I535.

Like the Bluetooth approvals from last night for the GSM carriers, the Bluetooth SIG did not provide very much information on Verizon’s model, except to say that the phone will support the Bluetooth 4.0 specification. The Bluetooth SIG listing was reported by Phandroid.  Also, like the AT&T and T-Mobile USA approval listings at the Bluetooth SIG, the Verizon model is shown in carbon blue color in the same design that’s being promoted by Samsung right now for the international GSM edition. 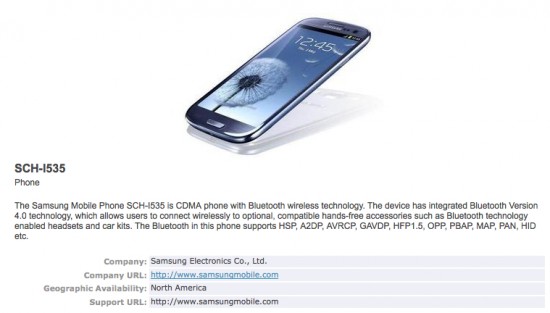 It’s unclear if that design that’s being used internationally will stick once the phone hits U.S. carriers and Verizon Wireless. In the past, with the Galaxy S I and Galaxy S II smartphones, Samsung had tweaked and altered the design slightly to fit the needs of the U.S. market. One such tweak, and a major one, that was done previously by Samsung was to remove the default home button for the U.S. market and replace that with the four Android navigation capacitive buttons just below the display. It’s unclear if the same will be done with the U.S. release and in particular with Verizon’s release.

It’s also unclear if Samsung’s quad-core Exynos CPU will be replaced with Qualcomm’s Snapdragon S4 CPU when the phone lands on Verizon, and the Bluetooth SIG did not mention if this phone will be a 4G LTE device. However, given Verizon’s prior statement that it would only release smartphones with 4G LTE built-in, it seems natural that this will be an LTE handset.

Samsung has stated that the Galaxy S III will be arriving in the U.S. this summer, but the company failed to give any more specific information regarding the hardware specs, release timing, carrier availability, or other information when we last spoke with reps at CTIA.