Yesterday, Best Buy started taking pre-orders for the Verizon Samsung Galaxy S4, a device that is without a specific release date or official pricing. Best Buy still is mum about the finalized pricing of the Galaxy S4 and its release date but thanks to its website, we now have a clue as to how much Best Buy and possibly Verizon, might be charging for it. 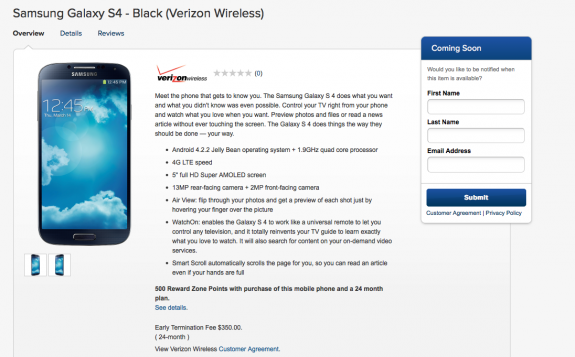 A search for the Verizon Galaxy S4 SKU at Best Buy reveals two separate pages that the retailer has for the upcoming device. The first is a sign up page that consumers can use to sign up to get the latest information about the anticipated device. Verizon has a similar sign up page up through its website right now.

However, the second page is maybe the most revealing as it features a price attached to the Verizon Galaxy S4. The device, which isn’t available to pre-order online, only in stores, is listed with a $699.99 off-contract price. That is $50 less than the AT&T and Sprint models that have shown up with $749.99 full retail prices.

This of course could just be a place holder for the Verizon Galaxy S4 but it could wind up being the actual price of the device through Best Buy. Thus far, we have been unable to track down any on-contract price information and Best Buy told Gotta Be Mobile that it still doesn’t know how much it will charge on-contract, despite taking pre-orders. 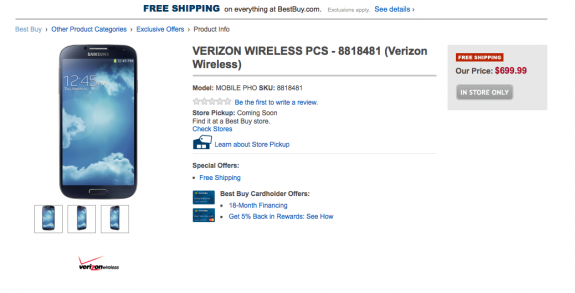 Staples told us that it will be charging $199.99 for the Verizon Galaxy S4 so it could be that that will be the price that both Best Buy and Verizon will charge as well.

The retailer also doesn’t know when the Verizon Galaxy S4 will be released. Verizon and a premium Verizon retailer have told us that it will be coming at some point in May but an exact date has yet to be nailed down. Rumors have suggested a May 30th release date on Verizon’s massive 4G LTE network but thus far, that date remains unconfirmed.

Best Buy, for its part, says on its sign up page that the device will be ‘Coming Soon.’