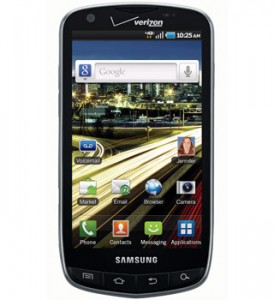 After a couple meetings in San Francisco, California, I walked into a corporate-owned Verizon Wireless retail store near the Union Square shopping district to see what types of accessories, cases, and new devices the store may have on display. After inquiring about a case for the Samsung Droid Charge, I was told that the store did in fact have cases–we’ll be posting a review of that particular case model in the next few days–but that the store did not have any phones in stock.

When pushed further, the employee at the store told me that the launch had been delayed and that there is no information at this time when the Droid Charge will be launching. At the time of this writing, the Union Square San Francisco location did not have any Droid Charge in its inventory stystem, according to the employee that I had spoken with.

The retail employee was unable to give a reason as to why the launch had belayed.

Additionally, the San Francisco, California store did not display the cases in the front of the store. When I had asked about the Droid Charge case, the retail employee was able to pull a few out from the back and showed me. There were several different silicone cases of varying colors–offering better grip and cushioning for impact should the phone be dropped or bumped–and also a hard case with a belt clip holster. The silicone cases were priced at $25 while the hard case with belt holster–in which we will soon snap pictures and do a video–was $30. The employee was able to sell the case to me.

Also keep your eyes on GottaBeMobile over the next few days for our full review of the Samsung Droid Charge, Verizon’s second 4G LTE Android smartphone.