The Samsung Stratosphere could have been called an ‘Epic’ phone a year ago as it’s basically the same design as Sprint’s Galaxy S 1 Epic 4G, but a year later and it’s a mid-tier device overshadowed by a new crop of dual-core 4G smartphones. So how does the Stratosphere stack up against the competition? Verizon created a handy comparison chart for its 4G LTE Stratosphere comparing the device comparing the device against its 4G LTE siblings in the form of the Sasmung Droid Charge, LG Revolution, and HTC Thunderbolt.

The Stratosphere will be a 4G LTE device, which when compared to its Sprint cousin will offer faster mobile broadband speeds. However, the difference is that Sprint does not cap nor meter its WiMax plans, meaning you can still get reasonably affordable unlimited data on the Epic 4G or the newer Epic 4G Touch. However, for those with a need for speed, the Stratosphere brings a sliding physical QWERTY keyboard, which slides out in landscape orientation, to Verizon’s 4G portfolio, adding a bit of differentiation to the relatively monotonous slate-only form factor thus far. 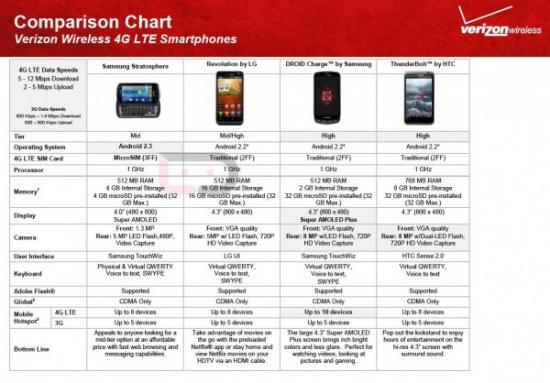 With a 4-inch Super AMOLED display with WVGA resolution, the Stratosphere’s screen more closely resembles the Verizon Fascinate’s screen than the newer Super AMOLED Plus display of the same resolution in a 4.3-inch package on the more powerful Droid Charge, though both devices will utilize the same single-core Hummingbird CPU clocked at 1 GHz it appears. The device will also carry a front-facing camera, rear-facing 5-megapixel camera, and 512 MB RAM.

The Stratosphere will most likely compete against the newly launched Pantech Breakout, which occupies the more affordable 4G LTE segment as far as pricing goes.