Verizon Wireless is running a special promotion right now to get some if its customers to upgrade to a smartphone by offering a $100 gift card. The deal runs through November 15th and would cover some of today’s hottest devices–including the Motorola Droid 3, Droid X2, the HTC Thunderbolt, LG Revolution, Droid Charge, and more–as well as devices that are rumored to be coming soon but have not launched–including the HTC Vigor or Droid Incredible HD as some are dubbing it, and the Droid Prime.

The deal is available both online–it’s listed on the Verizon website as an online exclusive–as well as in Verizon stores for those interested.

In the store it works for customers upgrading from a basic phone (one not requiring data packages) to a smart phone (requires minimum $30).  When you upgrade, you are sent a promo code for the VZW trade in site.  Once entered, they send you a box to send in your basic phone, and then when they receive it they send you a $100 gift card.  Currently the stores are only doing the upgrade promotion and not the new activations to VZW like they are doing online.  Some customers are even eligible to upgrade early if they go to a smartphone. 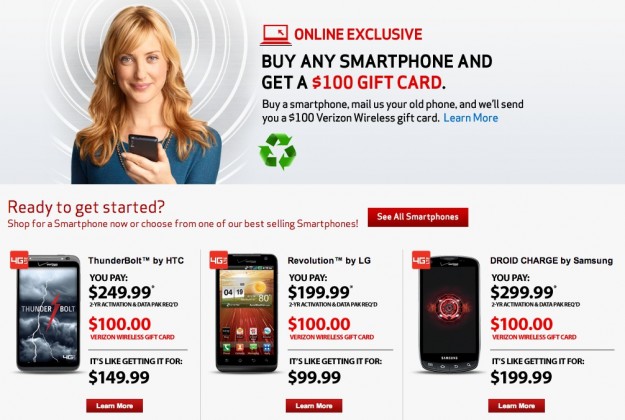 The move is a smart one for Verizon as customers on a smartphone bring in more revenues to the carrier with more features, such as data plans, messaging plans, and apps and services usage (Verizon V-Cast).