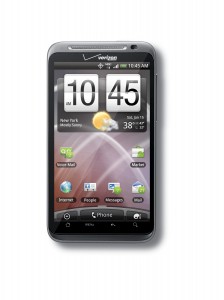 The subsidized price of the HTC Thunderbolt is $249.99. This price requires a new contract or eligible upgrade. A voice plan, starting at $39.99 per month, an unlimited 4G LTE data plan is $29.99 per month.  The Thunderbolt’s wireless hotspot feature is free through May 15, but after that date it will cost $20 per month for 2GB of data.

The HTC Thunderbolt can be used on both Verizon’s 3G network and 4G LTE netwok. Much of the U.S. is not covered by 4G LTE, but subscribers that are covered should experience blazing fast upload and download speeds that rival those of wired ISPs. Thus far, Verizon customer have only experienced 4G LTE through USB modems plugged into laptops. A 4G LTE MiFi card from Novatel is expected soon.

The HTC Thunderbolt is similar in appearance to the HTC EVO 4G, a phone that was announced a year ago and that runs on Sprint’s 4G network. There are several key improvements to the Thunderbolt, including a faster processor, more storage capacity and LTE compatibility.

The HTC Thunderbolt will be available at BestBuy, Verizon Wireless and Wirefly starting on the 17th. Wirefly is taking pre-orders and is promising that shipments will begin on the 17th. Best Buy locations may still be taking pre-orders, but some stores are reporting that they won’t likely be able to fulfill all orders on the Thunderbolt’s launch date.