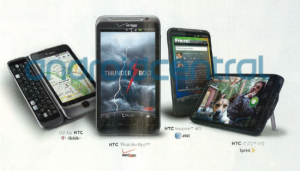 It looks like the latest advertisement in Rolling Stone magazine reveals two HTC LTE 4G devices for the two largest wireless carriers in the U.S., AT&T and Verizon Wireless. Both carriers have signed on to LTE as the technology to power their LTE network and the latter carrier is further along than the former.

For its part though, the HTC Thunderbolt, as an Android smartphone, has long been rumored. It has been leaked previously as the codenamed HTC Incredible HD, and will be Verizon’s answer to rival carrier Sprint’s HTC EVO 4G offering. The Thunderbolt will feature a kick stand, Android, and a large capacitive touchscreen. The ad does not indicate if the Thunderbolt will be a 4G LTE device, however. Verizon Wireless is expected to announce its first consumer devices running on its LTE 4G network in the next couple days at the Consumer Electronics Show.

As seen on Android Central, another HTC device that we’re glimpsing for the first time is headed for AT&T called the Inspire. The ad mentions that the HTC Inspire for HTC will be a 4G device, and given that AT&T has announced that it will be using LTE technology, the Inspire is set to inspire us with hopefully robust download and upload speeds on the carrier’s 4G LTE network, which is slated to come in the future. 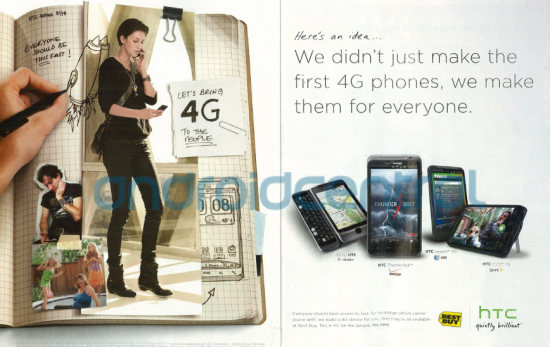 The Inspire resembles the HTC Thunderbolt, and could be built from the same chassis. It is shown with Android OS and the HTC Sense user interface on top.

The ad isn’t clear enough to discern whether the Inspire will have a front-facing camera like the Thunderbolt.