Verizon undeniably has the largest 4G LTE network in the U.S. while other carriers like Sprint are doing their best to rollout their networks, but the question is how fast are the speeds where LTE is available?

Using a Verizon iPhone 5 and a Sprint HTC One review unit we were able to test Sprint’s new network against Verizon’s older, larger network. The tests took place in Brooklyn, New York. Sprint hasn’t rolled out its 4G LTE network to the whole of New York City yet, but we were able to get a signal in Borough Park, Brooklyn.

Sprint’s speeds may change as the carrier finishes its New York City rollout, but all speeds for Verizon were consistent with previous tests.

Read: Speedtests: LTE Speeds to Expect for Your Galaxy S4 and HTC One 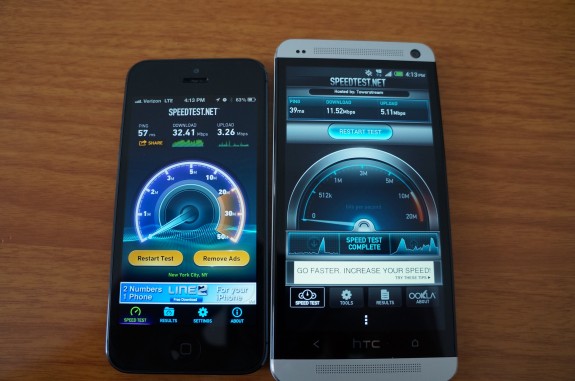 We tested each network three times to make sure the speeds were accurate. The test showed that Verizon’s network beats Sprint’s 4G LTE speeds handily. In the first test between the two devices the Verizon iPhone 5 recorded 32.41 Mbps down and 3.26 Mbps up. The Sprint HTC One, on the other hand, reported 11.53 Mbps down and 5.11 Mbps up.

In the next speedtest, the Verizon iPhone 5 beats the download speeds of the HTC One by at least 5Mbps. The Sprint phone, however, reported slightly higher upload speeds, making it better for uploading photos and videos, but only by a small margin.

Both phones reported speeds comparable to some broadband connections. Neither network is inherently bad in the few tests we performed, but some will prefer the faster speeds of Verizon. Verizon’s network also has the advantage of size. Sprint’s network is relatively small at the moment, and network speeds on Sprint 3G are notoriously slow. 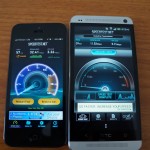 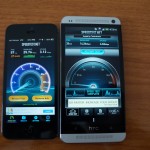 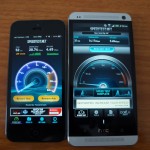