Someone leaked Verizon’s roadmap to BGR. The supposed roadmap includes an Android tablet, an LTE MiFi and a new DROID. According to BGR, the products listed in the roadmap will be launching between now and 2012.

One of the more interesting devices is a Samsung Android tablet:

Samsung is working on a 7″ screen Android tablet with front-facing camera. Motorola is also working on a tablet as well, except it will sport a 10″ screen, either 1GHz or 1.3GHz CPU, front-facing camera, and Android 3.0. Don’t expect the Motorola so soon though, as we’re informed that while the launch was supposed to happen in December, Android 3.0 will probably hold up the release of that device and we should expect it around February 2011.

The Samsung device will likely look something like this: 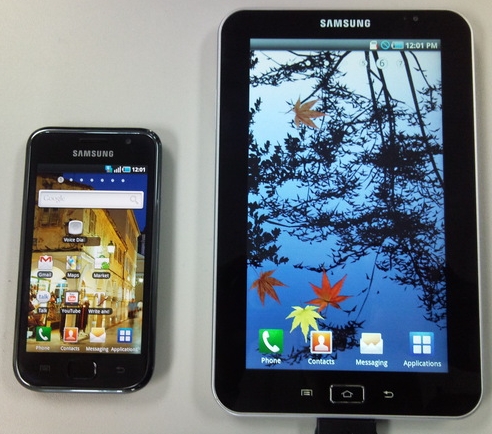 The new Motorola DROID, dubbed Droid Pro, will have a 4″ display and 1.3GHz processor. Another gadget that caught my eye is a Novatel LTE MiFi that can support up to 10 simultaneous users.

It’s clear that Verizon plans to continue pushing Android devices over the next couple of years. With all the pro-Android and anti-iPhone marketing coming from Verizon and its partners, I wonder if the iPhone will ever find its way over to Verizon’s network.