The Android-powered Vertu Ti is now said to have probably been one of the last luxury handsets designed while under full Nokia control given its model number. We had reported earlier in the week that Vertu, now majority owned by an investment group, was going to release an Android-powered luxury smartphone with designs inspired by the old Nokia 8800–an old Symbian-aged slider phone–and now we may know a little more information about that phone, which is rumored to be called Vertu Ti. 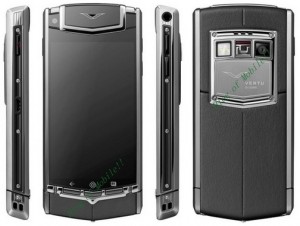 The design of the Vertu Ti is similar to Vertu’s existing Symbian-powered Constellation smartphone, made with various precious metals and a Sapphire crystal display. Sapphire crystal is the same material that Apple has now adopted for the camera lens cover on the iPhone 5.

It’s still unclear what ‘Ti’ in the name refers to, and if it means that the Vertu Ti will be constructed with titanium parts based on that metal’s chemical symbol.

If these speculations are accurate, this may be the first Android phones made and designed by Nokia, but without Nokia branding. While Nokia’s CEO Stephen Elop has repeatedly denied rumors that the company is exploring Android options now that it has released a number of Windows Phone, Elop’s comments did not cover the Vertu business.

Internally, some of the rumored specs for the Vertu Ti bear some resemblance to first- and second-generation Windows Phone Lumia models from Nokia. The WVGA resolution display may be borrowed from the Lumia 800 and Lumia 900 series running Windows Phone 7 while the dual-core 1.5 GHz Snapdragon processor from Qualcomm is the same chipset used on the latest Lumia 920 smartphone. The phone additionally has NFC, WiFi a/b/g/n, and Bluetooth 4.0.

The Vertu Ti is currently rumored to be one of the most affordably priced Vertu smartphone models to date. It’s rumored to launch with the price tag of 3000 Euros and may be announced sometime in February.

While Nokia has sold off a majority interest in Vertu, the company still holds a 10 percent stake in the luxury phone-maker. Unlike other luxury brands, which comes with metal parts and high-end price tags, Vertu phones are handcrafted and are made in the tradition of fine Swiss watches.