After the release of the Android 2.3, also known as Gingerbread, SDK yesterday, developers have discovered icons for video chat within the SDK. 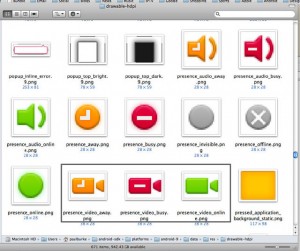 Video chat is a highly requested feature in the Android community as something that could be integrated with Gmail and Google Chat so that video chat wouldn’t require a lot of effort to use. Currently, in Android 2.2, also known as Froyo, and prior versions of the mobile operating system, both caller and receiver for video chat would need to install third-party software, such as Qik, which would enable video sharing. The ability to conduct video chat currently isn’t as seamless as Apple’s implementation with FaceTime on iOS devices, like the iPhone and iPod Touch, which connects iOS devices through an email address or phone number.

Video chat is a feature that was confirmed by Google’s Andy Rubin in his demo of the Motorola Honeycomb tablet at the All Things D: Dive Into Mobile event.

If Google is successful in launching video chat, the feature could potentially have a larger impact than iOS’s FaceTime protocol as there are many more users with Google accounts; Apple’s FaceTime is currently limited to Mac users and iOS handsets with front-facing cameras. With Android, enterprise users can theoretically begin a video conversation with another Google user on their laptop or work system via Google Apps or Google Chat, and then continue the chat session with their Android handset.

It’s unclear though which version(s) of the Android operating system would support the video chat feature when it launches as the icons were present in the Android 2.3 SDK while Rubin mentioned the features while demoing an Android 3.0 Honeycomb tablet.