At Mobile World Congress, Canonical is giving attendees a chance to check out how well Ubuntu for Android works in person. Ironically, they’re demoing the operating system on the Motorola Atrix 2, which has existing desktop-esque functionality. Hey, it comes with a dock, so why not?

Sarah Silbert of Laptop Magazine went hands-on with the Android phone turned desktop and liked what she saw, though the system wasn’t lightning fast.

“…the demoed version wasn’t the fastest phone on the block–we noticed a few seconds’ delay between clicking and launching Android apps on the Ubuntu desktop ecosystem–we’re sure the handsets that make it to market will be a few notches better.”

(Read: Ubuntu For Android Turns Your Smartphone Into A Real Computer) 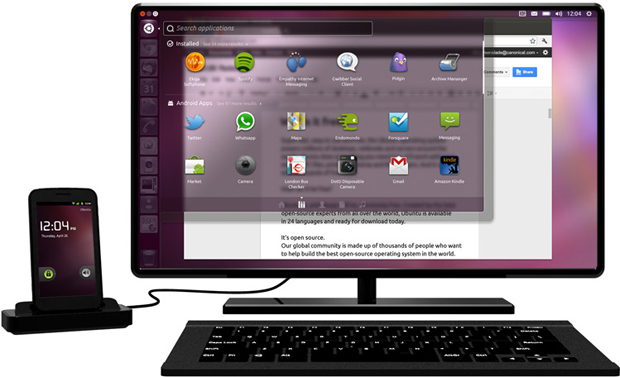 The Atrix 2 does meet the minimum hardware requirements (dual-core processor, 1GB of RAM), which makes me think that when Canonical said they were excited about quad-core phones, they meant that as a big hint. Of course, it’s also possible that the OS wasn’t fully tweaked to run the fastest with that particular hardware. See it in action in Silbert’s hands-on video below.

It would please me to no end to discover that Canonical is working with Motorola to replace their Webtop experience with Ubuntu for Android. Let’s hope this collaboration doesn’t also produce prohibitively expensive accessories, too.

Since Canonical’s Mark Shuttleworth is already on record as saying he wants to put Ubuntu on tablets as well as smartphones, I’m hoping to see Ubuntu for Android working on a Samsung Galaxy Tab (or Note) or another sweet Android slate in the near future as well.