Between now and May 31, T-Mobile users who switch to one of Virgin Mobile USA’s prepaid plans will get a $100.

That $100 comes back to users in the form of a service credit to their account after switching to a Virgin Mobile USA Beyond Talk device, then transferring their existing T-Mobile number, and activating their new phone before May 31st.

According to Virginia Mobile USA, that $100 credit is in addition to the $334 Virgin Mobile claim’s users will save if they chose to make the switch instead of going with T-Mobile’s new prepaid pricing.

The digital ad also notes that with plans maxed out on both carriers, T-Mobile users will be subjected to an automatic switch to 2G after their use exceeds 2.5 GBs of data. Virgin Mobile USA users will also see a speed reduction, but only to the company’s still-fast 3G network. 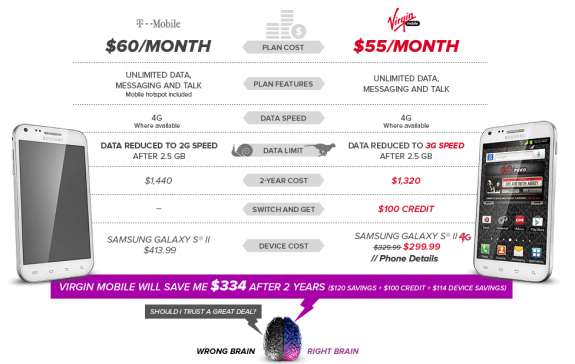 Virgin Mobile USA’s move to entice T-Mobile’s prepaid users comes just weeks after T-Mobile declared itself the premiere carrier for users in search of modern smartphones and low monthly costs. T-Mobile achieves this by passing on the costs of devices to users and letting them pay in monthly installments.

For example, Apple’s iPhone 5 would cost a user only $60 a month to maintain, however that user would need to pay the complete $579 price of the iPhone 5 when setting up service or put down a $99 deposit and pay the difference in monthly installments over time.

There’s also the question of the devices themselves. Virgin Mobile USA’s site doesn’t show any current Android or iOS based flagship released in the last year.  In contrast a quick check of T-Mobile’s site shows the Windows Phone 8X, Nexus 4, Samsung Galaxy S3, Blackberry Z10, and two of this year’s newest flagships, the Samsung Galaxy S4, and the iPhone 5.