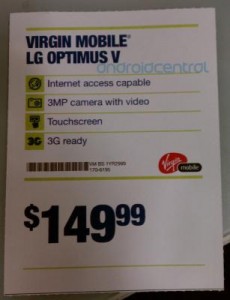 Virgin Mobile, a pre-paid wireless subsidiary of Sprint, will be following its mothership in adding another smartphone to its lineup. Like Sprint, which has offered the Android-powered Samsung Intercept, Virgin Mobile USA will be taking another page from Sprint’s playbook by bringing the Optimus One to its lineup. The Optimus V (V for Virgin Mobile) will be similar to Sprint’s Optimus S (S for Sprint), and, according to an image obtained by Android Central, will be priced at $150.

At this point, availability information for the Optimus V is not yet available.

The Optimus One series of smartphone is a budget, entry-level Android smartphone lineup created by LG.

Sprint had unveiled its Optimus S at the Fall 2010 CTIA in October with Sprint ID, which allows users to customize their Android smartphones with pre-packaged, downloadable theme packs complete with apps, wallpapers, ringtones, and other custom software that complement and sets the tone for the theme.