All the way back at CES, Vizio announced that it would be bringing a phone, a tablet and a Google TV device to the market. While details on the Google TV device has been scarce, we’ve seen the Vizio Smartphone and the Vizio Tablet pass through the FCC meaning that a release was on the way. Well, no new details on the phone, but the company’s 8-inch Android tablet appears ready to hit Walmart. 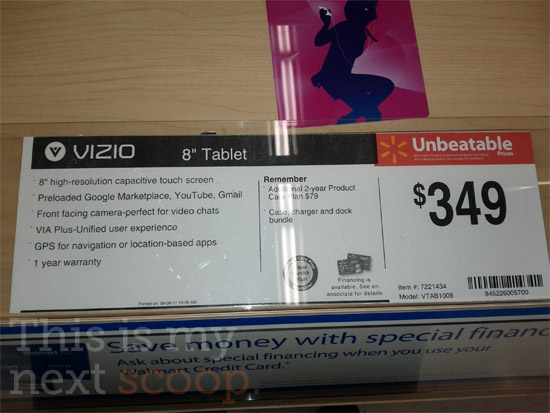 Today, more evidence  popped up suggesting that Vizio’s 8-inch Honeycomb tablet will cost $350 when it hits Walmart. There is still no concrete release date but Los Angeles Clippers player Blake Griffin posted a video on his YouTube page showing off the tablet and if that’s any indication, a release could be close.

The evidence unfortunately doesn’t confirm much in the spec department other than the 8-inch screen, GPS and a front facing camera. It’s also unknown whether or not it’s going to be coming with Android Honeycomb and from the looks of things, it might not.

If that’s the case, it’s likely going to be competing against the 7-inch Samsung Galaxy Tab that is currently stuck with Android 2.2 Froyo with no update to Honeycomb in sight.