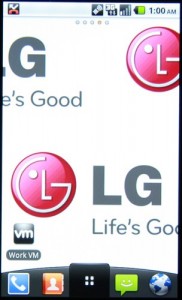 VMWare is bringing its virtualization technology to mobile in an effort to help enterprise users combine their work phone and personal phone into one device. This will help to give users the ability to customize and download non-work approved apps on the personal side, allowing end-users to endlessly customize their devices without fear of security risk, while also allowing IT managers to lock down the work side so that approved–and required–apps can easily be deployed all on a single phone.

Like virtualization technology on a desktop, VMWare’s solution for mobile will allow a phone to virtualize another operating system so that users can run the OS, just like opening an app, inside another OS.

Phone maker LG has announced that it will be integrating VMWare’s virtualization technology into some of its Android handsets in 2011, though virtualization may come to other platforms if there is a market demand; LG also is a partner for Windows Phone 7.

The company says in its press release:

Using end user computing technology from VMware, LG is aiming to increase its footprint in the enterprise sector while providing more options for both consumer and business customers. This new technology will enable users to adopt the mobile device of their choice, while allowing corporate IT departments to manage sensitive data on those devices with enterprise-level security and compliance.

Initial efforts include enabling LG smartphones to securely run a work account in isolation from a user’s personal account on a single mobile device. With this feature, LG mobile users will be able to safely carry a single device for both personal and work use. Solutions using mobile virtualization technology from VMware are expected to be available on LG smartphones in 2011.

Potentially, if your work environment is tied to a Windows Mobile environment, you can ask your IT manager to virtualize Windows Mobile into your favorite Android handset of choice. This may help customers adopt the latest consumer smartphone and still be enterprise-ready.