VZ Navigator for Thunderbolt Now in Android Market, But Where's the Phone? 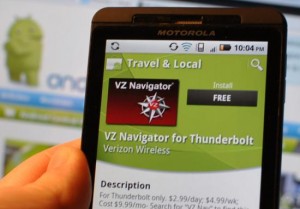 While Verizon Wireless has still not announced availability of the HTC Thunderbolt, a 4G LTE Android smartphone, the carrier has already released a version of its turn-by-turn GPS app compatible with the device and available for download in Google’s Android Market.

VZ Navigator is a turn-by-turn GPS solution that is offered either as an a la carte purchase (for metered use) or as a subscription for owners of various phones and smartphones on Verizon’s network. Like Google Maps with Navigation for Android, VZ Navigator will require Ineternet connectivity as maps aren’t stored locally on the phone; the phone will need to ping Verizon’s servers every so often to download map and routing information in segments.

Whether the release of the VZ Navigator app suggests that the Thunderbolt is nearing launch is anyone’s guess, but at least it will get support for Verizon’s own mapping programs. Verizon typically does not bundle its navigation program on Droid-branded devices; the Thunderbolt is an Android device but isn’t branded under the Droid line.